Social gatherings and family events moving indoors to avoid the colder weather is largely to blame for the high rates of spread.
By Madeline Holcombe, Christina Maxouris and Ray Sanchez, CNN 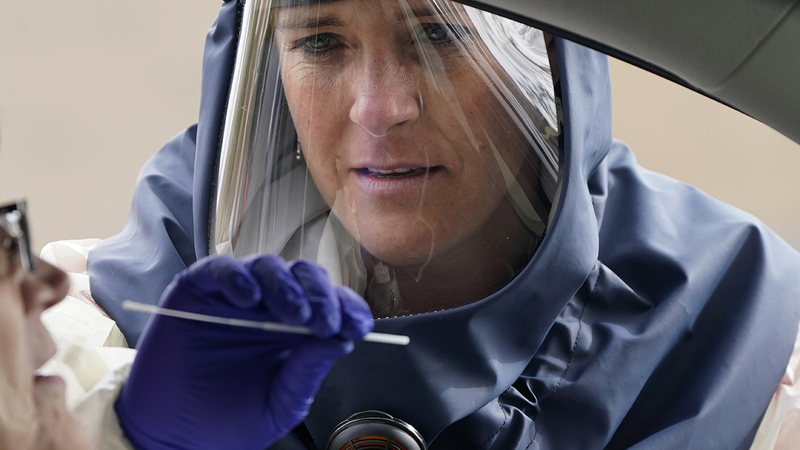 COVID cases, deaths on the rise in US

As the fall surge continues, the United States has reported its second-highest day of new Covid-19 cases, according to data from Johns Hopkins University.

Health experts have warned that the fall season would bring a resurgence of cases -- and since the US never lowered its daily case baseline enough, they say compounding cases will likely get worse. Already, the national cases total more than 8.5 million and 224,891 people have died, according to JHU.

"We easily will hit six-figure numbers in terms of the number of cases," Michael Osterholm, director of the Center for Infectious Disease Research and Policy at the University of Minnesota, told CNN Friday night. "And the deaths are going to go up precipitously in the next three to four weeks, following usually new cases by about two to three weeks."

Social gatherings and family events moving indoors to avoid the colder weather is largely to blame for the high rates of spread, officials said over the weekend.

In Maryland, the governor said this week family gatherings were the No. 1 source of transmission in the state, followed by house parties. In North Carolina, health officials reported its highest daily case count Friday and said they continue to see clusters "from social and religious gatherings."

The President has said in recent days the country is rounding the corner when it comes to the pandemic. But alarming patterns across the US tell a different story.

At least 35 states reported more new Covid-19 cases in the last week than the week prior, according to Johns Hopkins data.

"We're still in the midst of a pandemic and need everyone to take this seriously. Wear a mask. Social distance," Murphy tweeted.

"This virus has not gone away simply because we are tired of it," Murphy said.

In Florida, health officials on Saturday reported 4,471 additional cases and 77 new resident deaths. That's the third day this month the state has reported more than 4,000 new cases in a single day, according to a CNN tally. Florida has had a total of 776,251 Covid-19 cases and 16,417 state residents have died, the health department said. There have also been 203 fatalities of non residents.

"Daily increases are now comparable with what we saw in April 2020," the state health department said in a statement. An additional 29 virus-related deaths were reported Saturday.

"If rates continue like this, we risk overwhelming our hospitals and having many more Michiganders die," Khaldun said in a statement.

On Saturday, Illinois reported 6,161 new cases, the highest number since the pandemic began. More than 4,000 new cases have been reported in the state for six of the last nine days, according to health department data. There were 63 new deaths.

Illinois Public Health Director Dr. Ngozi Ezike made an emotional appeal to residents on the importance of face coverings.

"As we see the numbers go up in the hospitals, people are bringing more beds, trying to prepare for the Covid units again. And these staff that went through all that pain to try to save as many people as they can are seeing history repeat itself," she said. "We don't have a vaccine yet, but we have a mask, and we're asking people to use that, and I don't know what else we can say."

Expert: Vaccine may not come this year

While many experts and officials have worked to give hopeful estimates on when a Covid-19 will be available, that timeline remains uncertain.

Dr. Anthony Fauci said Sunday that experts will know by early December whether a potential coronavirus vaccine is safe and effective, but widespread vaccination will probably not be possible until later next year.

"We will know whether a vaccine is safe and effective by the end of November, beginning of December," the director of the US National Institute of Allergy and Infectious Diseases said. "The amount of doses that will be available in December will not certainly be enough to vaccinate everybody -- you'll have to wait several months into 2021."

(Video is from previous story) Pfizer received permission to test its vaccine in U.S. kids as young as 12

National Institutes of Health Director Dr. Francis Collins said Friday that while he's "cautiously optimistic" about the US having a vaccine authorized by the end of the year, he said it "might not happen and it might take longer."

But Collins added it was good news that the US has more than one vaccine candidate in development.

"If you were betting the whole thing on one vaccine, I'd be a lot more worried," he said.

His remarks came the same day drugmakers AstraZeneca and Johnson & Johnson announced they were set to resume their paused Covid-19 vaccine trials in the US, both of which saw health scares in participants.

And when a vaccine does get approved, experts have said it's crucial that enough Americans get it. If only half of the country is willing to get vaccinated, Collins warned, Covid-19 could stick around for years.