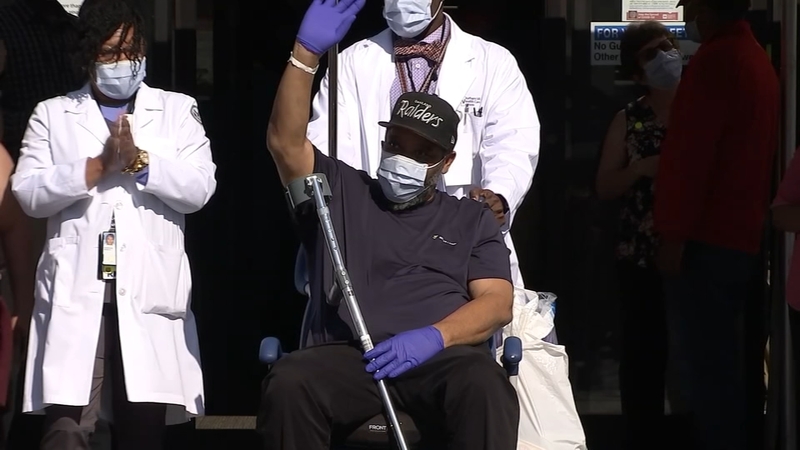 DURHAM, N.C. (WTVD) -- A North Carolina man who has been in the hospital for more than two months has finally been released and reunited with his family.

Ollie Hendricks, a 58-year-old U.S. Army veteran, caught COVID-19 in early April. He said he felt body aches for a few days before waking up with a fever of 103.9 degrees Fahrenheit. He has fought a long, difficult battle with the virus.

"Probably about a month and a half ago, things didn't look good for me," Hendricks said. "It's really hard, to be honest, it's hard."

Durham VA medical staff organized a special farewell Friday to celebrate his discharge from the hospital.

Doctors, nurses and other staff members gathered around the hospital's entrance. They showered the patient with balloons and cheers as he made his way out of the hospital and into the arms of his loved ones.

Hendricks was surpised with a hug from two of his family members, including one of his 10 grandchildren.

Family members hugged Ollie Hendricks after he was cleared to go home following his more than two-month battle against COVID-19.

Now that he is able to go home, Hendricks said he planned to spend the Fourth of July holiday barbecuing with his family and making his special ribs.

"Corona, people need to start taking it seriously, because--I'm going to live, but it can kill you," Hendricks said. "I stared death in the face, but by the grace of God, I am so blessed."