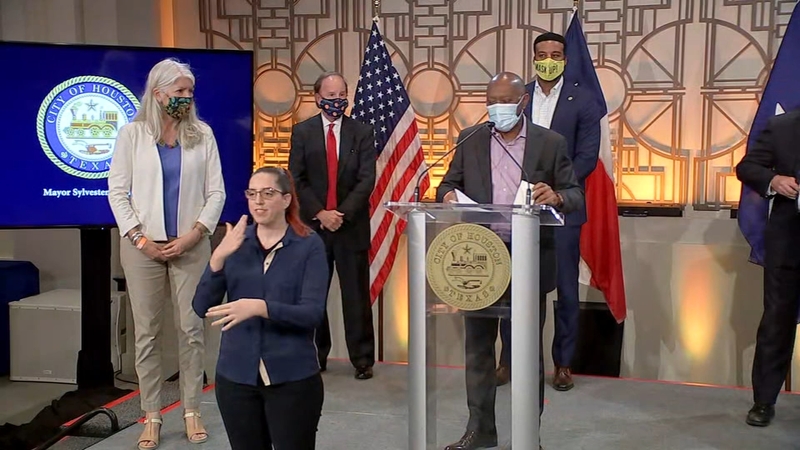 HOUSTON -- During a news conference Friday, Houston Mayor Sylvester Turner said the city's infection rate is three times higher today then it was three months ago.

"Currently, the surge in COVID-19 cases in Houston is serious and real," Turner said.

He also added that the city's positivity rate jumped from three percent to 11 percent, the hospital rates increased, ICU numbers increased, and the number of young people testing positive for COVID-19 also increased.

"Caseloads across the community and the hospitals are the highest it has been since virus started," Turner said. "Where we are today is more dramatic and pronounced than it has ever been."

The news conference came hours after Gov. Greg Abbott issued an order stating that bars and similar businesses that receive more than 51% of their gross revenue from alcoholic beverage sales had to close by noon on Friday. While customers won't be allowed to visit, those businesses can provide delivery and take-out services, which include beverage sales.

Learn more about coronavirus symptoms and other helpful information during the COVID-19 pandemic.

The new orders were issued Friday, a day after Abbott ordered hospitals in the state's largest metros to stop all elective surgeries in order to save bed capacity for COVID-19 patients.

The order also requires restaurants to hold capacity at 50% beginning Monday, but they can remain open for dine-in service.

He also shut down river-rafting trips and banned outdoor gatherings of over 100 people unless local officials approve.

Turner said he 100% agreed with the governor's decision to close bars and reduce restaurants' capacity.

"This virus will continue to spread uncontrollably in our community if we do not take drastic steps like the ones I just announced," Turner said. "We have the ability to regain control of the virus and prevent a continued health and economic crisis."

He also added that he's working on a "wall of shame" for businesses who do not follow the governor's order.

The coronavirus is spreading, what does COVID-19 do to your body?

Turner said that the businesses will be posted on the city's social media site and blasted on a huge board during news conferences if caught not following guidelines.

"For more businesses they need customers, they need people walking in their doors. People need to know who's being responsible," Turner said.

On Thursday, Abbott announced the state was putting a pause on any future reopening plans, though none were scheduled and the announcement did not affect businesses that were already allowed to reopen. Earlier in the day, Abbott sought to free up hospital space for coronavirus patients by banning elective surgeries in four of the state's biggest counties: Bexar, Travis, Dallas and Harris.

Texas saw new cases drop slightly on Friday, to 5,707, but hospitalizations increased to 5,102.