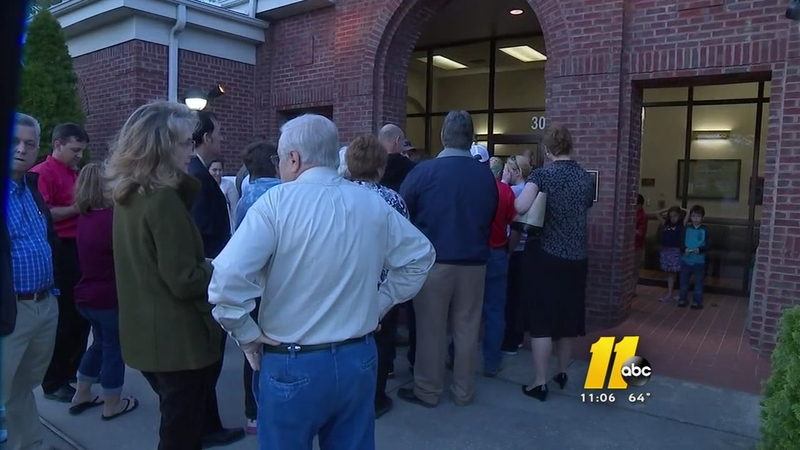 FOUR OAKS (WTVD) -- A couple hundred faces crowded around the front door propped open to Four Oaks' Town Hall on Monday night, straining to hear their neighbors inside, speaking out against a proposed CSX rail hub.

Only about 30 landowners and residents were allowed to fill the seats inside for the public comment portion of the town council meeting. Of the dozen who signed up to speak, only one voiced support for the hub project.

Through eminent domain, Mayor Linwood Parker said CSX would pay $18.5 million for 450 acres of land to build a mega-transportation hub to offload containers from freight trains onto big rigs.

"There's no land for sale," Georgia Adams said, fighting back tears at the podium.

Parker opened the meeting, addressing the crowd for about an hour, hoping to change their minds, warning they'll wish for such an economic driver in the future.

"You run the railroad off and then tell them you need them. This is about jobs," he said.

But emotions poured out as one landowner after another expressed their staunch opposition to a massive hub taking over their beloved countryside.

"I'm gonna say shame on y'all," said Bridgette Olive. "Shame on you."

Line out the door and down the sidewalk for Four Oaks public hearing on CSX container hub. @ABC11_WTVD #abc11 pic.twitter.com/PbQQFjxCb6

Many expressed concerns about potential health risks, other with the traffic it would bring, and then the noise a rail hub would bring.

"It's not what we chose," said Michelle Keene. She and her husband built their forever home on 69 acres in Four Oaks. "I built porches all around my house so that I could sit out there in the peace and quiet."

Parker told everyone at the meeting he has a scheduled conference call with CSX attorney Lew Starling. He said he plans on pressing the company, giving it 10 days to decide whether it plans to move forward with building its hub in Four Oaks.

"We need to know if they're coming," Parker said.