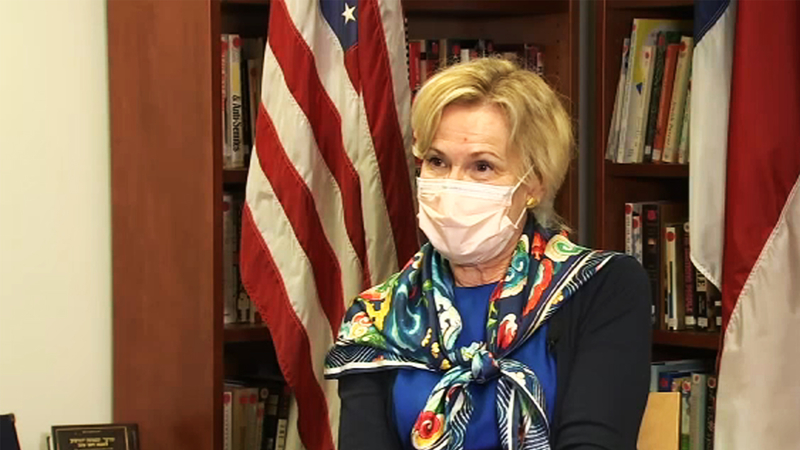 RALEIGH, N.C. (WTVD) -- Dr. Deborah Birx, a key member of the White House Coronavirus Task Force, made a quiet visit to Raleigh on Wednesday to meet with Gov. Roy Cooper and state officials about the COVID-19 Pandemic.

In an exclusive interview with ABC11, Dr. Birx spoke highly of the state's handling of the virus and in its work in tandem with the federal government.

The meeting was held Wednesday afternoon at the Emergency Operations Center in Raleigh and included discussions with UNC System President Peter Hans, as well as a phone call with Vice President Mike Pence.

"This is a big system," Dr. Birx said of UNC. "Many of these college students, even though they're online, are living in the college town and they're living off-campus, and we're talking about how do we get information to them, how do we get them tested, how do we encourage them to protect the vulnerable members of the community. We were talking about how can we as a federal government increase tests and increase student awareness about protecting hometown family and their college family."

Dr. Deborah Birx on Trump rally, family parties - "I'm frustrated any time I see someone without a mask"

On Sept. 6, the White House Coronavirus Task Force sent a nearly 300-page report to the country's 50 governors; the report, obtained by ABC News, summarizes the data and trends for each state and offers lengthy recommendations.

North Carolina, according to the report, is identified as a "Red Zone" for cases, indicating 112 new cases per 100,000 residents - 18th among all states - and higher than the national average of 88. The Tar Heel State, however, does fare better when it comes to the percentage of positive tests, which continues to hover between 5 percent-10 percent, thus earning a "Yellow Zone" distinction.

The Task Force's assessments also note Mecklenburg, Wake and Pitt counties accounting from nearly 25 percent of all new cases, while the metro areas of Greenville, Rocky Mount, Lumberton, and Elizabeth City, among others, are in the Red Zone for cases per 100,000 residents. Several other cities, including Charlotte, Raleigh, Greensboro, Fayetteville, Winston-Salem, Wilmington, New Bern and Goldsboro, among others, are in Yellow Zone.

Many of the 15 recommendations revolve around boosting testing and contact tracing efforts, including at universities. The Task Force also emphasizes that state and local officials use "more intensified mitigation measures", including an "aggressive public messaging campaign and use of data to encourage local ordinances to enforce social distancing and mask mandates."

According to officials, the meeting was part of Dr. Birx's "tour" through various states across the country to survey their responses to the pandemic and review their efforts in tandem with the federal government response. Notably, however, Dr. Birx's visit occurred exactly one day after President Donald Trump held a large rally in Winston-Salem where social distancing and face coverings were, for most, the exception and not the rule.

"I am sure masks were offered to the people who attended the rally, and what I'm saying to everyone who decides to attend a rally, to everyone who decides to out in public, please wear a mask," she asserted. "For people who want to attend rallies and participate in the political scene, wear masks and socially distance and protect those who are beside you. That human behavioral change is saving people's lives and preventing transmission around the country. That's my absolute clearest message. I say it and wear a mask in the White House. I'm wearing a mask now. I think it's important people know the public health people believe this is vitally important to preventing transmission."

MORE from Dr. Birx in #ABC11Exclusive : “For people who want to attend rallies and participate in the political scene, wear masks and socially distance and protect those who are beside you.” @ABC @JoshMargolin @rickklein @jeffmason1 @ABC11_WTVD #COVID19 #coronavirusNC #ncpol pic.twitter.com/BsHltwv7Tw