Durham Sheriff: 10% percent cut in budget would be detrimental 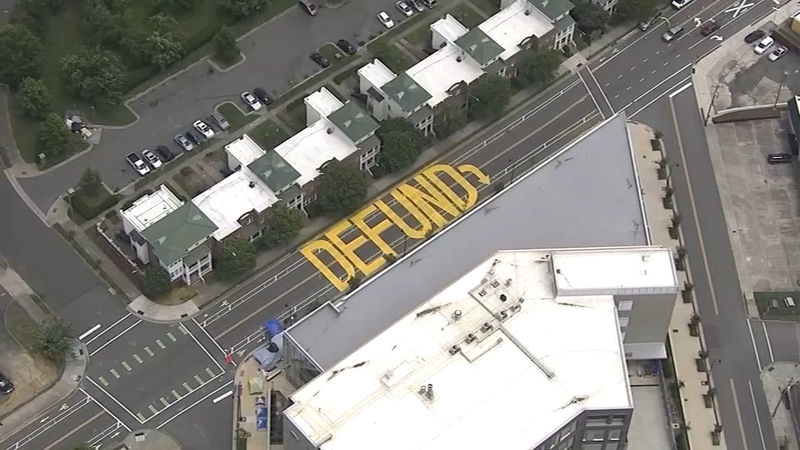 Durham Sheriff: 10% percent cut in budget would be detrimental

DURHAM, N.C. (WTVD) -- There are still calls all across the country to "defund" the police a year after George Floyd's death.

Advocates are calling for Durham County Commissioners to reduce the sheriff's department budget by 10% and invest more in mental health.

The topic came up Thursday night on the Durham Joins Together to Save Lives Task Force and the majority of people on the call agreed it would be detrimental to programs across the Bull City.

"It could severely hinder our ability to do the great work we're doing inside the detention center and out," said Clarence Birkhead, the Durham County Sheriff.

Sheriff Birkhead said a budget reduction might affect peer support programs in the Durham County jail. They run 26 in the detention center designed to acclimate people back into society once they are released.

Tonight @DurhamSheriff shares his concerns with me about a 10% reduction in his budget that some folks are calling for and what kinds of programs would potentially be on the chopping block #abc11 pic.twitter.com/sNhdp5jQFa

Just this week, inmate Lucion Green completed his high school education while on the inside.

"We should be championing all the good work we're doing in Durham," Birkhead said. "I think it's an opportunity for us to lead the state if not the nation in addressing some of the ills that plague mostly our black and brown communities."

Dr. Wanda Boone, executive director of the nonprofit Together for a Resilient Youth, is on the "Saves Lives" committee.

She didn't know what programs would be affected specifically if the budget is cut, but she would be most worried about Crisis Intervention Training which teaches officers about how to respond to someone in mental crisis and to reduce arrests for non-violent offenders.

Durham County Commissioner Wendy Jacobs is the chair of the task force but didn't respond to comment as of late Friday night.

The task force meeting happened the same night as another shooting on Elm Street in Durham and three other separate shootings in Raleigh.

"I react with concern, I react with where are we going, I react with what steps can be taken," said Boone, who is trying to stop the violence before it happens. "This is really about community engagement and going to where people are and with data and a real understanding of what's going on."

Her organization works to prevent substance abuse among youths in the Bull City.

"There is a link between substance abuse and crime -- we need to think about that in terms of crime reduction and overdose in the Black community," said Boone, who also sits on a wellness task force in Durham. "The difficult thing is that these answers are not immediate but we're talking about how to prevent, how to intervene and what needs to be done."
Report a correction or typo
Related topics:
durhamdurham countymoneysocietysheriffpolice
Copyright © 2022 WTVD-TV. All Rights Reserved.
TOP STORIES
Officers warn boaters of risk of driving impaired this holiday weekend
Tropical Storm Colin threatens a wet holiday weekend for Carolinas
VP Harris expected to discuss Roe overturn at Essence Festival
Fayetteville police kill armed woman having mental 'crisis'
Uvalde school police chief resigns from city council
Teen girl speaks out after surviving shark attack at Florida beach
Texas Supreme Court blocks order that resumed abortions
Show More
Texas inmate asks to delay execution for kidney donation
Fewer young Americans want to serve, and due to obesity fewer qualify
Experts set expectations about 'vaccine efficacy'
1-year-old dead after being left in hot car in Mebane
Planned Parenthood Raleigh reporting an influx of out-of-state clients
More TOP STORIES News