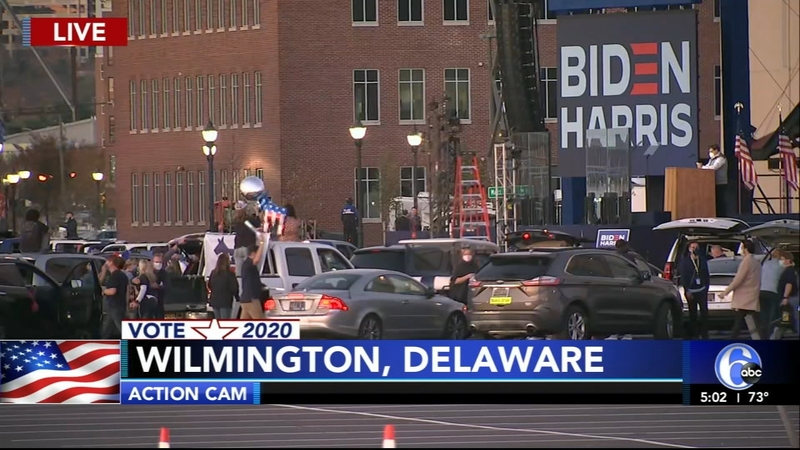 WILMINGTON, Delaware -- Outside Joe Biden's headquarters in Wilmington, Delaware, a crowd was quickly growing beyond the security perimeter. There were people of all ages cheering, singing and honking their horns, and the crowd joined together to sing "God Bless America."

The Biden family moved to Delaware from Scranton, Pa., in search of greater opportunity.

Delaware, now the epicenter of the political universe, went into celebration mode after news broke that one of their own was being elected president.

Biden spoke Friday night, addressing the nation for the third time this week from Wilmington.

Biden offered an optimistic outlook on uniting the country and on the election as thousands of ballots continue to be counted in battleground states across the country, including Pennsylvania.

RELATED: A look at the electoral college in the 2020 election
EMBED More News Videos

Biden supporters stood behind a maze of fencing outside the Chase Center hoping to catch a glimpse of the man they want to be the next president.

Standing alongside his running mate, Sen. Kamala Harris, and against a backdrop of flags, Biden wasn't able to give the acceptance speech his aides had hoped. But he hit notes of unity, seemingly aimed at cooling the temperature of a heated, divided nation.

Kamala Harris tweeted a video of her calling Joe Biden after several news organizations declared him the winner of the U.S. presidency.

"I cried. You just don't even know. I'm so tired of the hypocrite that's in the White House," said Carol Riley.

"I was born and raised here. So, to have vice president, now president is just monumental for this little state," added Veronica Renteriamojica.

Meanwhile outside the Chase Center the crowds of Biden supporters continues to grow. Many of them plan to stay here well into the evening to catch a glimpse of the President elect. @JoeBiden #Election2020results #VotersDecided @6abc https://t.co/ZjZyDVFptw pic.twitter.com/H1tkQg2Yo3

Voters in Delaware made their pick for president while holding negative views about the country's direction, according to an expansive AP survey of the American electorate.

The race between President Donald Trump and Democratic rival Joe Biden concluded Tuesday as the nation remains in the throes of a global public health crisis and mired in the economic downturn it brought on. AP VoteCast found that 35% of Delaware voters said the U.S. is on the right track and 64% of voters said it is headed in the wrong direction.

In the race for president, both voters under 45 and older voters were more likely to favor Biden over Trump.

Both voters without a college degree and college-educated voters were more likely to support Biden over Trump.

Biden led Trump among suburban voters while voters in small towns and rural areas were split between Trump and Biden.

The coronavirus pandemic was top of mind for many voters in Delaware. Forty-five percent said it is the most important issue facing the country today.

Voters also considered the economy a major issue, with 25% saying it ranked at the top.

Voters were more negative than positive in their assessments of the nation's economy. Overall, 43% described economic conditions in the U.S. as excellent or good, and 56% called them not so good or poor.