54 arrests made in HB2 protest as lawmakers convene 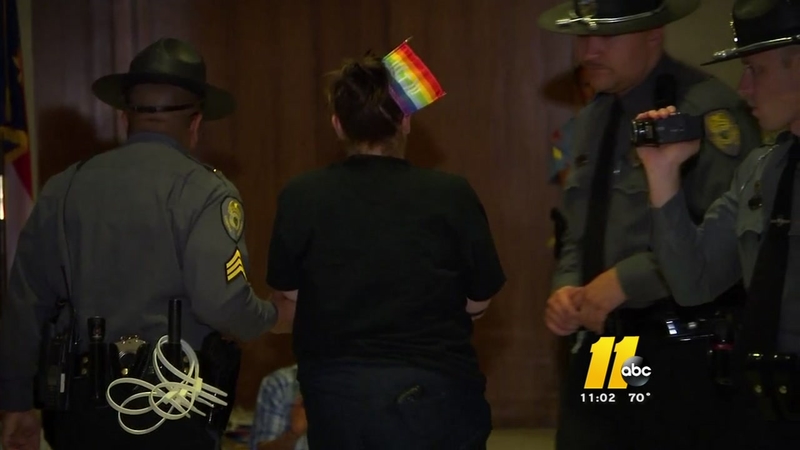 RALEIGH (WTVD) -- A total of 54 protesters were arrested Monday evening, as some interrupted lawmakers when the short session convened Monday.

Protesters inside the House chamber started shouting as state lawmakers tried to adjourn Monday night, less than 30 minutes after they reconvened for this year's short session.

Last group of #MoralMonday protesters being arrested in their fight, this time, against #HB2 pic.twitter.com/fjBgELFmm0

After 18 were arrested earlier, 36 more who refused to leave were detained after ignoring police warnings. One man had to be carried out after he refused to leave. Police tried to place him in a wheelchair but he flopped out as he tried to resist.

"Anyone you take the freedoms and rights from my neighbors and from other people I care about, you take them from me," one protester said.

The arrested protesters were released from jail overnight. They were greeted by about a dozen people cheering as the arrestees walked out of the Wake County Detention Center.

The charges included trespassing, violating fire code and refusing to leave as a day of protests against House Bill 2 stretched on in Raleigh.

"No business but the people's business in our house! Repeal House Bill 2!" demanded members from NC Turn Up.

Opponents of HB2 blocked the building's entrance as lawmakers left, lobbying for a repeal of the new law, a request never addressed during session.

"We may not finally prevail this session on eliminating discrimination as in our law, but we'll certainly make that effort," said Rep. Larry Hall, the House Democratic leader.

Earlier in the day, North Carolina NAACP President the Rev. William Barber spoke as part of the Moral Monday movement.

"Hate bill 2 was passed in the spirit of the politics of Jesse Helms reincarnated and designed to use homophobia, race, and class as political wedge issues," Barber said. "Hate bill 2 discriminates against the working poor by taking away municipalities' ability to demand that contractors raise minimum wages to living wages and pay vacation sick leave and have minority set asides.

The arrested protesters were released from jail overnight.

Activists and protesters on both sides of the controversial bill gathered in Raleigh Monday morning to voice their opinion of what should come next.

Several LGBT advocacy groups delivered a petition to Gov. Pat McCrory. Groups said they collected 180,000 signatures calling for a repeal. Boxes were piled high at the Capitol this morning.

"I haven't felt this bad since I first started the transition. It's so hard," said Sharon Westfell, who is a transgender woman living in Chapel Hill.

"How dare a legislature or governor think that they are bigger than God," Barber said. "This is our moment to reject the politics of fear and hate. This is our time"

Supporters of the law vowed to stand firm.

"We're not going to do a repeal of House Bill 2. It makes common sense. There may be some minor tweaks," said House Speaker Tim Moore, a Republican.

Supporters and opponents of HB2 gathered in Raleigh.

Moore joined more than a thousand others Monday who rallied in support of HB2 outside the legislative building.

He told reporters he plans to focus on issues such as taxes, the state budget and getting teachers a pay raise.

"As the 'Moral Monday' crowd spends the day yelling, Republicans will get to work to raise teacher and state employee pay, while continuing to protect the privacy rights of North Carolinians," said NCGOP Executive Director Dallas Woodhouse. "It's unfortunate William Barber is only happy when creating a raucous, otherwise, he might have heard about the General Assembly's ability to give more back to the people of North Carolina thanks to the budget surplus under our GOP leadership."

Supporters of the law also gathered in Raleigh's Halifax Mall to listen to speakers, including Moore and religious leaders. They said HB2 is about protecting women and children.

"Your wives, mothers, sisters, grandmothers, and little girls should not be placed in harm's way on account of the vocal minority of extremists who are upset that nearly 70 percent of North Carolinians wish to protect the privacy women and children," said Tami Fitzgerald, executive director of the North Carolina Values Coalition.

Lawmakers will not take any votes on legislation until Wednesday at the earliest.

"What I can tell you that I'm hearing and what my colleagues are hearing has been overwhelming support," Moore told ABC11. "You're hearing some criticism, mainly from out-of-state companies and large corporations but if you talk to folks on Main Street, they're in support."

#HB2 opponents making way to Legislative Building for Sit-In demonstration. These will go on through evening #abc11 pic.twitter.com/A0rIKTLmmU

House Bill 2, which was approved by the Republican legislature and GOP Gov. Pat McCrory on March 23, was in response to a Charlotte City Council ordinance approved in February that would have extended protections to gays and lesbians as well as bisexual and transgender people while at hotels, restaurants, and stores. Charlotte would have allowed transgender people to use the restroom aligned with their gender identity.

As the public outcry continues, opponents say they are not giving up.

"I'm going to support the full repeal of the bill. I know many other legislators are going to do that as well, and we'll see whether the public's wishes will be respected," Hall said.

Penny Nance, CEO of Concerned Women for America announced a nationwide boycott on behalf of her organization of all Target stores. The retailer recently made the move to allow transgender people to use whichever bathroom they want when shopping in Target stores.

"You did the right thing in signing this bill," Nance said, encouraging Gov. McCrory and lawmakers. "Hold firm! Protect women and children. We're not afraid of transgender people. We're afraid of the sexual predators who will prey on the weak and defenseless. Use common sense."

Visiting from Charlotte, twin brothers and celebrity entrepreneurs David and Jason Benham shared their personal stories of being persecuted for their faith. They mentioned the businesses and big names that have pulled out of North Carolina in protest of House Bill 2, and urged those in support of the law to take a stand of their own.

"You know what we're really interested in?" asked Jason. "Is knocking down this bully Goliath in our culture that is demanding that Christian values are silent."

With a Republican majority, some Democrats told ABC11 on Monday that they do not believe House Bill 2 will be repealed during this session, but they said they'll keep trying.

Opponents also say the law is a disaster for North Carolina's economy. Several businesses and corporations are condemning HB2. President Obama is joining the chorus calling for a repeal. The NBA is demanding a change in order for the 2017 All-Star game to stay in Charlotte. If that event is moved, it would be the biggest protest to date. The All-Star game is worth a $100 million to a city.

"Folks are standing with North Carolina because this is absolutely inhumane right. You are taking away humanity from so many groups of people from race to gender to sexual orientation. When you have that many people attacked in one state, everybody is rising up. It's 2016," said gay rights advocate Gloria Merriweather.