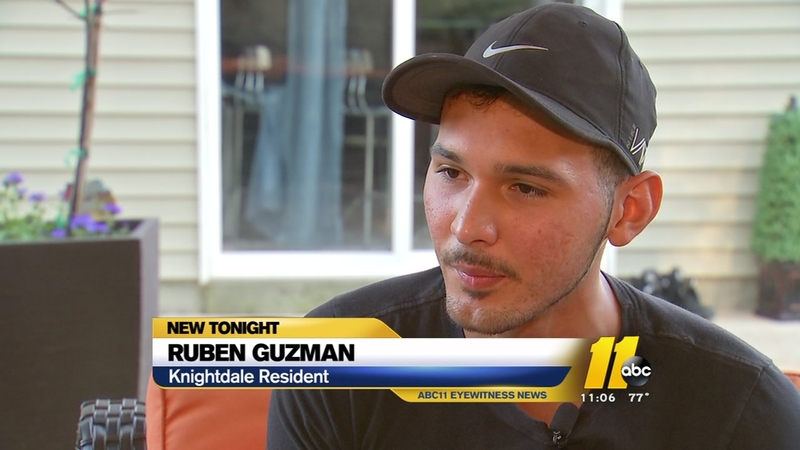 WAKE COUNTY, North Carolina (WTVD) -- In his first face-to-face interview with ABC11, Ruben Guzman took us back to the night that would take him away from his home in Knightdale for two months.

"I was brought it on a crime I did not commit and no one believed me," said Guzman, 22.

In mid-March, Guzman said friends picked him up for a party in a car he didn't know had been stolen. Knightdale police arrested the group. Guzman said surveillance video later proved his innocence and after about a month at the Wake County jail his charges were dismissed.

"I thought I was going to get out," Guzman said.

"They put chains on my feet, on my hands and then they drove me in a small van out of North Carolina," Guzman said.

He was taken into Immigration and Customs Enforcement custody and found himself in a transport van on his way to a facility in South Carolina.

He said he doesn't know why but those driving the transport van played sad music for the ride.

"It was sad, I remember people crying," Guzman said.

After about a week he said, he was loaded onto an inmate bus that was bound for the Stewart Detention Center in Georgia.

Guzman described the more than 10-hour ride as cramped, hot and with no breaks. He said when inmates finally arrived to Stewart, some relieved themselves in the intake room before making it to a bathroom.

"The seats there, they're not soft, it's straight metal," said Guzman describing the ride to Georgia, "you're sitting in the tightest spot like this for 10, 11 hours. My hands were numb, my feet were numb."

Guzman described his experience at Stewart as horrific. He described having to change in front of dozens of men in close quarters, even falling asleep on the intake-room floor before he was assigned a cell. He also said information on his case was hard to come by, and he wasn't able to talk to his family right away.

The entire time he was afraid that he would actually be deported to Mexico. Guzman grew up in the U.S. and has no ties to Mexico. He said he doesn't speak Spanish well and considers himself as an American.

All of this happened while Guzman's charges had been dropped and his DACA, Deferred Action for Childhood Arrivals, was active. His attorney is trying to fight what happened to Guzman.

For now, Guzman has been back home with his family for a few days and is feeling more at peace. Still, he said he's not finished telling his story.