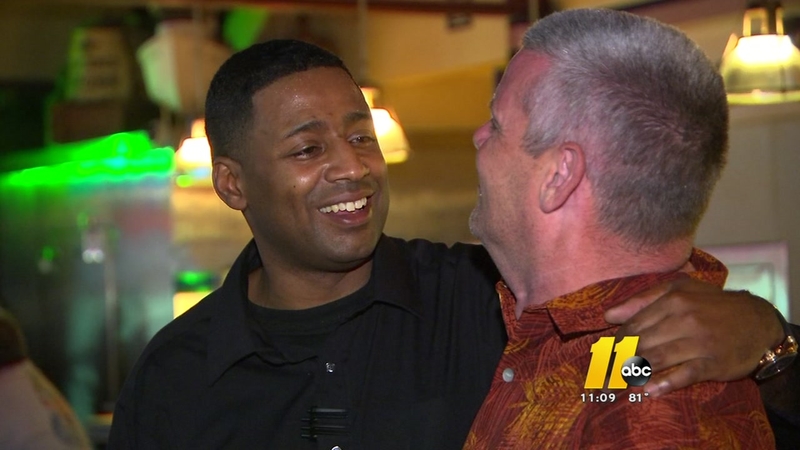 Catching up with kind waiter

RALEIGH (WTVD) -- Lee Bondurant chose to spend his birthday at one of his favorite Raleigh restaurants, 42nd Street Oyster Bar. He spent it with family and friends and this year, he added one more person to that list.

It's been more than a month since we shared a photo that captured the hearts of thousands. A photo of Lee and a man who just goes by the name of Five.

Five is a waiter at 42nd Street Oyster Bar in Raleigh. He works two jobs and is getting ready to start classes again in January. He's a humble guy, who doesn't really like a lot of attention. But when Lee and his family come through the door his face lights up when he sees his new friend.

"Here we are again," said Lee to Five, as the two had their arms around each other.

"Here we are again," said Five, looking at Lee.

The two have seen each other since, but they met about a month ago when Lee was in the restaurant with his mother, Linda. Five was busy with customers, but noticed Lee's mom was feeding him his meal. Lee has cerebral palsy. For Five, what he did next came natural. He just wanted to literally lend a helping hand and make sure all his customers enjoyed their meals.

Lee's mom, Linda, took a picture of Five feeding her son. Little did she know that the image would show the start of what is now a growing friendship, but that it was also the spark of a social-media frenzy.

Five waits on Lee and his guests at his birthday celebration at 42nd Street Oyster Bar.

Five doesn't have a Facebook page and had to be told by his boss that the photo of Five and Lee was getting a lot of attention.

"Shares and likes? I had to ask people 'what does this stuff mean?' " Five said.

He said people have been recognizing him everywhere he goes.

Laughing, Five said, "I'm going into the gas station and somebody wants to buy me gas, I'm like no!"

Then came the letters.

Some of those letters even came with money that Five has put into a fund created in Lee's name for a cerebral palsy foundation.

The attention and the support has been overwhelming for Five, and for Lee.

"I'm very blessed," Lee said. "It shows there are good people in the world still."

Comforted by that thought, Lee sat down to another birthday dinner. He sat at the head of the table surrounded by loved ones and happy to welcome one more friend for the celebration.