F-TRUMP: Couple at odds with Texas sheriff over anti-Trump sticker 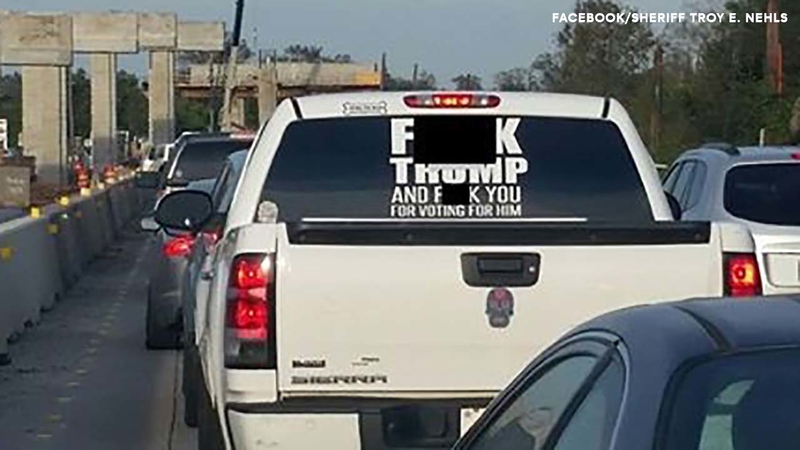 The controversial sign in question reads, "F (expletive) Trump and f (expletive) you for voting for him."

"I have received numerous calls regarding the offensive display on this truck as it is often seen along FM 359," Nehls wrote on Facebook. "If you know who owns this truck or it is yours, I would like to discuss it with you."

"Our prosecutor has informed us she would accept disorderly conduct charges regarding it, but I feel we could come to an agreement regarding a modification to it," he wrote.

ABC11's sister station ABC13 first tracked down the driver of the pickup truck. Karen Fonseca said she put the custom-made graphic up about 11 months ago.

She said her family is expressing their First Amendment rights and voicing their dissatisfaction with President Donald Trump. Fonseca said she's surprised Nehls couldn't reach her. She's open to sitting down with him.

She insisted that she has no intention of removing the sign.

"It makes people happy," she said. "They smile. They stop you. They want to shake your hand."

Fonseca said she's most at odds with the president about his proposed border wall.

She said people tell her they "wish they had the guts" to put up a similar sign on their vehicle.

"No Sheriff Nehls, you can't prosecute speech just because it contains words you don't like," ACLU said.

-------------------------
ABC11 has decided to slowly reduce the number of stories on the website that have a comments section. We believe very strongly that our audience should have an opportunity to discuss and debate events in our world, however, we have not been able to moderate the comments as well as we would like. Instead of hosting a platform that could allow a few loud and ugly voices to dominate a conversation, we want to encourage everyone to join us on our social media platforms and speak out there. Facebook: facebook.com/ABC11 Twitter: twitter.com/ABC11_WTVD
Related topics:
societyrichmondpresident donald trumpviral
Copyright © 2022 KTRK-TV. All Rights Reserved.
TOP STORIES
FDA authorizes Pfizer COVID-19 booster shots for children ages 5 to 11
You can now order 3rd round of free at-home COVID-19 tests
NC Primary Election: What to know before you vote
Police looking for Johnston County man in Fayetteville double homicide
Baby formula maker Abbott says agreement reached to reopen plant
NCCU law analyst: 'Replacement theory' driving increased hate crimes
Inmate caught after escaping Orange County prison in Hillsborough
Show More
President Biden to meet with families of Buffalo shooting victims
Raleigh Fire, Police warn of looming problems without major pay raises
House panel holds public hearing on UFOs
Shaw University rolls out plan to redevelop downtown Raleigh campus
Baby giraffe fitted with orthotic at San Diego Zoo Safari Park
More TOP STORIES News