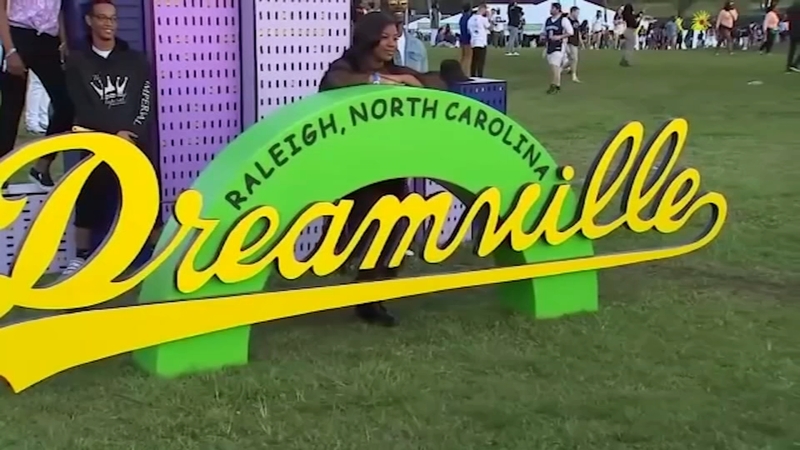 RALEIGH, N.C. (WTVD) -- More than 40,000 people are expected to descend on downtown Raleigh for Dreamville. Festival organizers are assuring that health, safety and security are a top priority for the weekend-long affair.

People are being encouraged to sign up ahead of time for Fest Emergency Alerts to stay in the loop.

Jonathon Leach is gearing up for the Dreamville experience. He didn't go in 2019 and definitely is not missing it this time.

"It's unbelievable. We've never had anything like this in Raleigh before. We get a chance to experience things that go on in Atlanta, LA, NY and they're bringing it right here," said Raleigh resident Jonathon Leach.

He trusts the party in his hometown will go off without a hitch.

'Dreamville is all family': Festival fans full of excitement arrive in Raleigh from all across US

Organizers are implementing some changes.

They're also being encouraged a look at the map ahead of time or keep a screenshot saved on their phone, to know where all nine emergency exits are located if something were to happen.

Security expert Patrick Fiel of PVF Security Consulting says putting on an event "takes a lot of people. A lot of agencies involved in this type of event."

He says there are lessons learned from previous tragedies.

Back in 2017, a lone gunman shot into a crowd at a Las Vegas concert, leaving 61 people dead, including himself.

Ten people died last year after a crowd surge at Astroworld during a Travis Scott concert.

Dreamville Festival 2022: What you need to know

Festivalgoers will not be able to bring blankets, chairs, or outside food to Dix Park.

Getting to Dreamville will likely be tough for drivers.