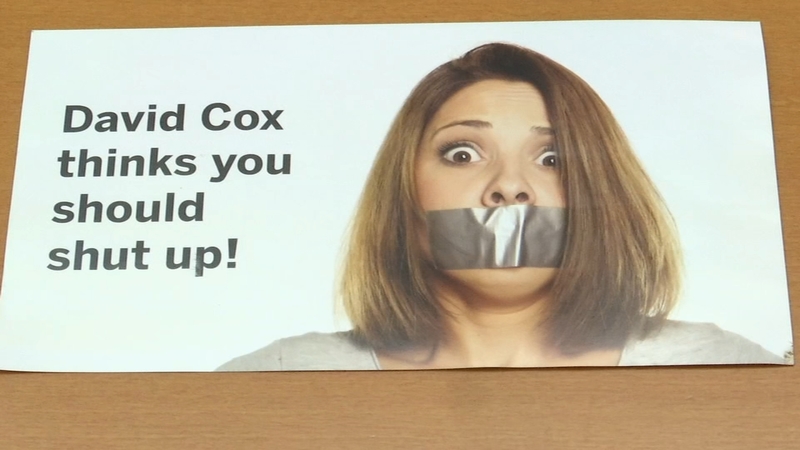 RALEIGH, N.C. (WTVD) -- A controversial flier mailed to voters targeting Council Member David Cox has received pushback over its use of a picture of a woman with duct tape over her mouth.

The picture, which has the phrase "David Cox thinks you should shut up!" next to it, takes aim at Cox's vote of a rule to prevent residents from addressing individual council members during public comment at council meetings.

"In the age of "Me Too," in a progressive city like Raleigh, where we talk about Raleigh to have a woman gagged in the ad is pretty surprising," said David McLennan, a political science professor at Meredith College.

McLennan said the ad's jarring imagery was likely intended to get attention.

"It's a low-profile race. Often it's to just gain the attention of voters and to try and spark them into coming out. In this particular case, the more outrage you can produce, the more likely it is somebody will check into the race further, look at both candidates, maybe even vote," McLennan said.

In a statement to ABC11, Dustin Engelken, TAA's Government Affairs Director, wrote, "It's unfortunate that some have reacted negatively to the image. We obviously in no way intended to promote violence against anyone and we deeply regret that the image we used has detracted from the underlying message that David Cox is a bully who has tried to silence citizens' voices at City Council with whom he disagrees."

Cox responded to the ad in a lengthy statement on Facebook, where he wrote:

"Today, many of you received a mailer attacking me. In this election I have become used to being attacked and have tried to take it in stride. But today's mailer has simply gone over the line.

"I condemn in no uncertain terms this mailer from the Triangle Government Alliance affiliated with the Triangle Apartment Association for its disrespect, and, frankly, depiction of violence against women.

"I have three younger sisters and my mom had eight. Nothing is more disturbing and deplorable to me than a young woman with duct tape over her mouth.

"Thank you all who have supported me. I am grateful for your many kind words today and through the election."

Cox's opponent in the District B race, Brian Fitzsimmons, also denounced the mailer in a Twitter thread, where he wrote:

"Some residents in District B received a mailer today that was put together by a group called the Triangle Government Alliance. It used language and a picture that were both, frankly, abhorrent.

"As with any independent expenditure in politics, I had absolutely no knowledge of this. I have already reached out to the Triangle Government Alliance to condemn what they sent out.

"We can disagree on issues and do our best to hold folks accountable, even regarding the issue that is referenced in the mailer. But rhetoric like this does nothing to make any sort of positive change, and it needs to stop.

"And one last thing: this was wrong not because I have a sister, a wife, or friends who are women. It was wrong because it was wrong. Women have more value than their relationships with men."

Separate from this specific mailer, McLennan noted the copious amount of materials voters have received leading up to Election Day.

"The infusion of cash across not only city council races, board and county commissioner races - now we're seeing the school board races. So I think it's the area, the growth of the area is contributing to the importance of local politics. But we've also seen a breakdown in the state and federal level of being able to do things. So there's added pressure on local government to make decisions that affect people's lives. That makes people who have money choose to put their money in local race as well," McLennan said.