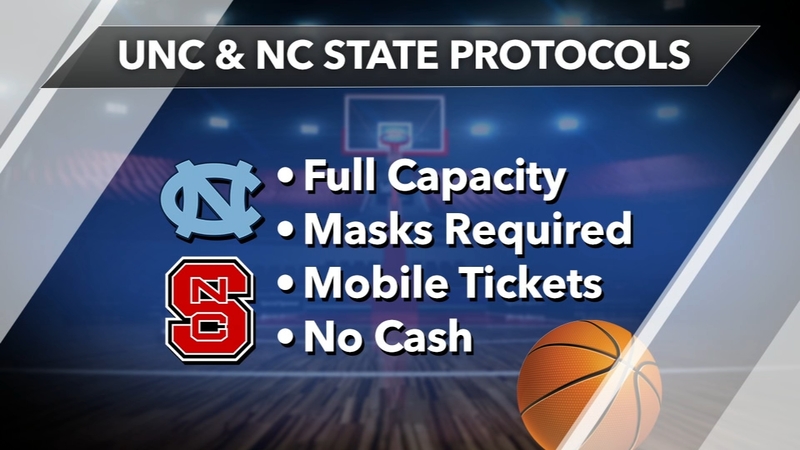 There are new opponents for Duke and North Carolina this weekend thanks to COVID chaos.

The No. 2 Blue Devils (9-1) announced Friday afternoon that they will face Elon in Cameron Indoor Stadium on Saturday.

Tip time will be at 4 p.m. The game will be televised on ACC Network.

UPDATE: We will face Elon on Saturday at 4 PM ET in Cameron. The game will be televised on @accnetwork.

Tickets / parking passes for the originally-scheduled game vs. Cleveland State/Loyola (MD) will be accepted tomorrow.

Loyola, Maryland then stepped in as an opponent for the Blue Devils, but that game was also canceled.

Tickets and parking passes for the originally-scheduled game vs. Cleveland State/Loyola will be accepted Saturday.

Meanwhile, the Tar Heels will not play the fourth-ranked UCLA Bruins this weekend because of COVID-19.

The Tar Heels (8-2) were scheduled to play the Bruins in the CBS Sports Classic in Las Vegas, but COVID-19 developments in the UCLA basketball program forced the Bruins to pull out of the tournament.

UPDATE: UCLA's game versus @UNC_Basketball in the CBS Sports Classic this Saturday has been canceled. pic.twitter.com/LohrhHeRwr

This will be the second straight game UCLA had to miss because of COVID-19.

However, the Tar Heels will still be playing basketball in Las Vegas.

That's because Ohio State University was also forced to drop out of the event because of COVID-19--leaving their scheduled opponent, Kentucky, without a team to play against.

Due to COVID-19 protocols, UCLA and Ohio State will not participate in the CBS Sports Classic pic.twitter.com/86Y9M4Xa3Y

Organizers of the CBS Sports Classic announced Friday morning that UNC and Kentucky would now play each other at 5:30 p.m. on Saturday.