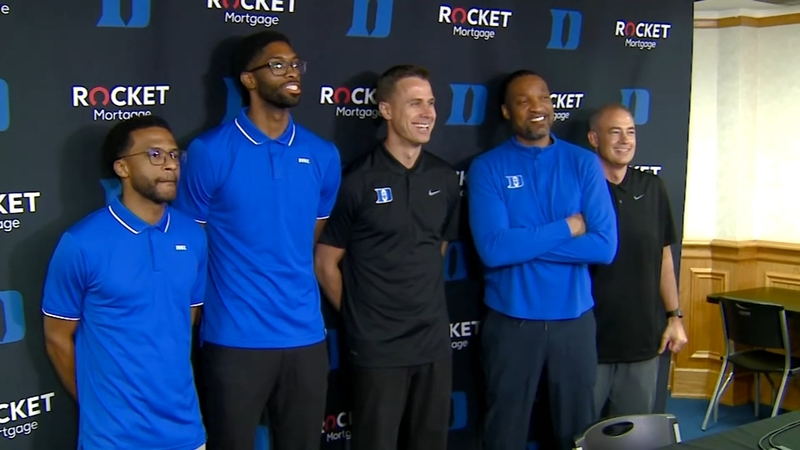 DURHAM, N.C. (WTVD) -- Eleven months ago, Jon Scheyer was anointed as the next head basketball coach at Duke. Now it's officially all his show.

In his first meeting with the media, Scheyer said on Tuesday that the program is on track to contend for a national championship next spring.

There is a good amount of turnover to deal with, however. Jai Lucas is a new assistant coach replacing Nolan Smith. The Blue Devils are waiting to see what happens with Trevor Keels, who has entered the NBA draft process but didn't hire an agent and could return to Duke.

Scheyer also has six incoming freshmen in a star-studded class that includes the top two high school players in the country (Dereck Lively and Dariq Whitehead, respectively) and a third in ESPN's Top 10 players in No. 7 Kyle Filipowski.

The Blue Devils also have No. 26 Mark Mitchell and No. 50 Jaden Schutt coming aboard along with two transfers and three key returnees including point guard Jeremy Roach.

"We've still got some work to do but I think, first and foremost, the thing that I love about the position we're in is our roster," Scheyer said. "You know, getting a guy like Jeremy Roach back is really important."

Roach averaged 8.6 points and 3.2 assists per game last season for a Duke team that reached the Final Four.