Duke comes from behind to stun rival UNC 28-27 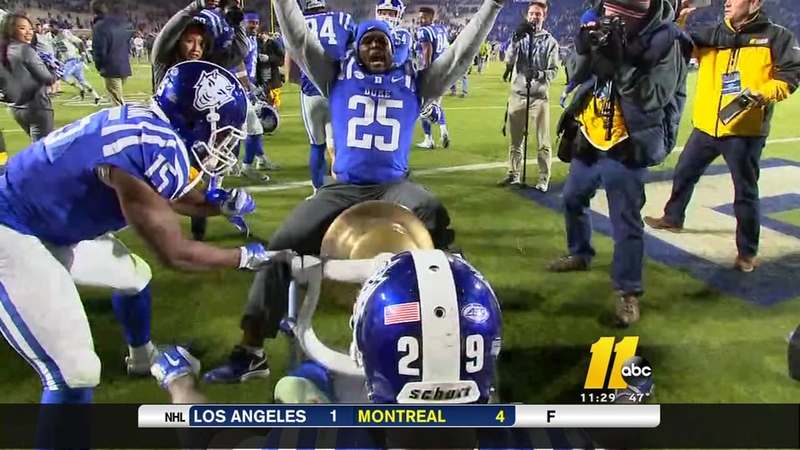 DURHAM (WTVD) -- Duke waited until it was time to play No. 15 North Carolina to finally cut out all the mistakes that kept haunting the Blue Devils in close losses.

They ran the ball with a physical edge and tightened defensively, then ended their Senior Night by sprinting across the field as time expired to reclaim a lost rivalry trophy.

Daniel Jones ran for two scores and threw for another to help the Blue Devils upset the Tar Heels 28-27 on Thursday night to secure their first Atlantic Coast Conference win.

Duke (4-6, 1-5 ACC) was flirting with its first winless league record since 2007 after a tight loss at No. 5 Louisville and a pair of three-point losses to Georgia Tech and No. 18 Virginia Tech.

"I laid all of that out there: here's the path we've been on, here's how you correct it," Cutcliffe said. "They're smart. They listen, they believe. And that's huge that they keep buying into each other, the loyalty. So that joy, that's huge."

Daniel Jones ran for two scores and threw for another against the Tar Heels on Nov. 10, 2016.

Jones, a redshirt freshman, ran for 94 yards as part of a ground game that kept moving the chains against the Tar Heels (7-3, 5-2, No. 17 CFP). Shaun Wilson ran for a game-high 107 yards and a score of his own, Duke finished with 227 yards rushing and converted 10 of 17 third-down chances.

MAN OF THE HOUR pic.twitter.com/h3dkOfqKHe

"Our offensive line was doing a tremendous job all game," Jones said, "firing off the ball and being physical and creating that physicality that we want as a team."

That formula was on display at the end, as Duke took more than 6 1/2 minutes off the clock with a long drive from its own 1 before punting back to UNC. The Blue Devils then came up with a final stop, with Alonzo Saxton II picking off Mitch Trubisky near midfield with 1:02 left on a night that ended with Duke players sprinting across the field to re-claim the Victory Bell presented to the winner of the long-running rivalry.

Great sportsmanship after the game from Ryan Switzer, Mack Hollins and David Cutcliffe. Good guys all around pic.twitter.com/NA72JDAfb6

"Every time we would make a play, we would shoot ourselves in the foot on the next one or something would happen," Tar Heels coach Larry Fedora said. "There was no consistency whatsoever."

The Tar Heels likely saw any chance of repeating as the league's Coastal Division champion die with this loss considering they had to keep winning and hope for the Hokies to lose once. But there was a familiar problem with being physical enough to stop the run, on top of the surprising offensive struggles after halftime.

After a couple of close losses, Duke showed it had enough fortitude to bounce back and play a clean game even as it flirted with the program's first winless ACC record since 2007. Notable in Thursday's performance: no turnovers for the second straight week.

North Carolina will almost certainly slide in the AP Top 25 after this one. The question is whether the Tar Heels - who have been in and out of the poll this season - might fall all the way out again after losing to a winless ACC team with a curiously shaky performance.

The Tar Heels came into this game with nine straight wins on an opponent's home field, tied with No. 3 Clemson for third longest in the nation behind No. 1 Alabama (11) and No. 9 Oklahoma (10).

North Carolina got off to a sprint of a start, jumping to a 14-0 first-quarter lead behind a sharp Trubisky. The junior completed 12 of his first 15 passes for 200 yards and three touchdowns, but threw for just 97 yards on 12-for-18 passing with two interceptions from there. UNC managed only two second-half field goals.