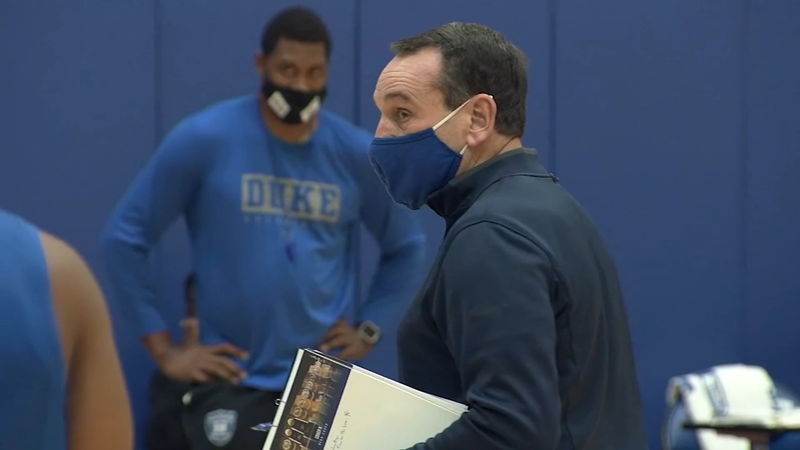 DURHAM, N.C. (WTVD) -- College basketball on Tobacco Road is right around the corner -- we think.

There will be plenty of last minute cancellations and postponements and the coaches and players are preparing for anything.

Duke is dealing with another curveball before the first ball is tipped. Positive COVID-19 cases at Gardner-Webb forced the postponement of the Blue Devils season opener on Wednesday night. No makeup date has been announced. It's the kind of fluidity that every program will face, like it or not.

NEWS: Our game Wednesday night vs. Gardner-Webb has been postponed following a positive COVID-19 test within the Gardner-Webb program.

Our season opener is now scheduled for this Saturday vs. Coppin State in Cameron (2 PM ET, ACC Network Extra).

"Every time you get on the internet, you see that there's another program that has to pause because of COVID-19 and that's a tough thing for us," Keatts said.

N.C. State is scheduled to host Charleston Southern on Wednesday night. The Wolfpack will play at least their first couple of games at Reynolds Coliseum without fans forcing the players to create their own energy, which has coach Keatts concerned.

The look and feel of the atmosphere will be entirely different as. Williams will have fewer, if any, students to throw towels to in pregame warmups.

"To be completely honest with you, I would rather play with no fans," he said. "I think it just really shows who can play the game."

Focusing on how to keep COVID-19 out of the locker room and if or when a game is going to get canceled is less than ideal. Williams said that if he's hypersensitive to the unknowns then he's not preparing his team to play.

The Tar Heels, like the Wolfpack, are also scheduled to open the season Wednesday at home, against Charleston.

Duke will regroup on Saturday with a home game against Coppin State at Cameron Indoor Stadium. Tip time is 2 p.m.