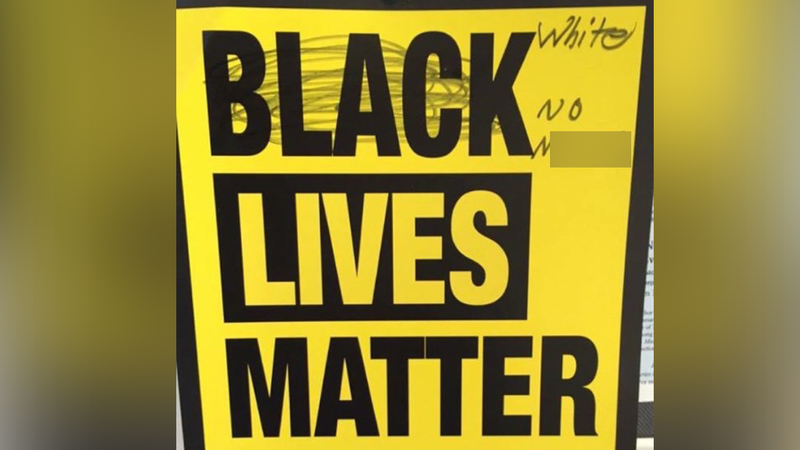 DURHAM (WTVD) -- Duke University and thousands of students are condemning whoever vandalized a poster on campus with a racial slur. The ad was put in hallways to promote an upcoming Black Lives Matter event.

Someone scratched out the word "Black" and wrote "White" followed by "No N-word".

A parent tipped off ABC11 and in an email said, "Racists are plaguing our nation, even at the most affluent university like Duke."

The defiled sign was found Friday morning inside the Richard White Lecture Hall on East Campus.

Riley Hockett is a freshman at Duke and saw the sign when he went to class inside White Hall.

"It's very disrespectful and it looks bad on us as a community, as a whole," said Hockett.

The university says the sign was removed as soon as officials were notified.

"Obviously, it was ignorant and uncalled for," said student Ahmed Mohammed.

"It doesn't represent the majority of students at Duke. It's an isolated incident," Mohammed continued. "I just feel like most of the students here are good hearted, kind and don't mean bad."

About a hundred students rallied on the steps of Duke Chapel not long after the discovery. The group, as well as the university, condemned whoever vandalized the poster.

"Incidents like this are still too common and always disturbing," said Vice President for Public Affairs and Government Relations Michael Schoenfeld. "A cowardly idiot with a marker doesn't get to define our community, and the quick and passionate response by Duke students reminds us that it is vital to be vigilant in calling them out, and persistent in condemning them."

The incident comes months after a noose was found on campus. It was found hanging in a tree near the Bryan Center Plaza on April 1. A school investigation located the person responsible and "determined that it was a result of ignorance and bad judgment."

The student did not face any criminal charges.

In an open letter of apology, the student claimed he was playing with the string while sitting with friends and left it hanging because he "truly did not appreciate the historical sensitivity of a noose hanging in a tree."

The Black Student Alliance at Duke did not want to comment on Friday's incident to ABC11.

The Duke Chronicle reported Junior Henry Washington, president of Black Student Alliance, gave a speech at the Duke Chapel gathering emphasizing the need to take the incident in stride and as a reminder to remain fervent in demanding equality.

The Black Lives Matter event is being at Page Auditorium this upcoming Wednesday. Parrish Cullors, the co-founder of the movement, will be speaking. The event starts at 7 p.m.