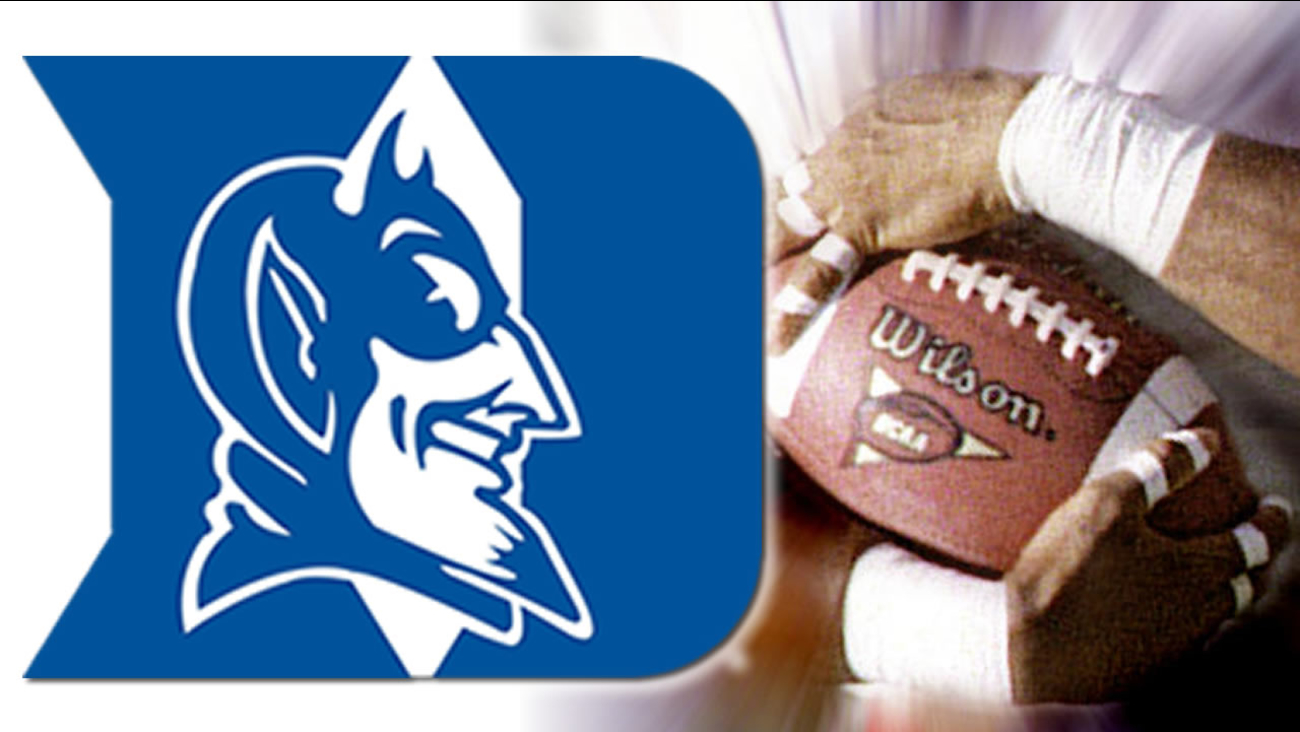 BLACKSBURG, Va. -- Thomas Sirk had an answer for anyone thinking No. 23 Duke's success was all about the Blue Devils' highly rated defense.

Thomas Sirk had an answer for anyone thinking No. 23 Duke's success was all about the Blue Devils' highly rated defense.

Sirk threw four touchdown passes, the last one in the fourth overtime, and then ran for the game-winning 2-point conversion Saturday night, giving the Blue Devils a 45-43 victory against Virginia Tech in the longest game in Atlantic Coast Conference history.

After arriving in Virginia with the nation's No. 4 overall defense, Sirk showed the offense deserves some credit, too.

"We had a great game plan coming in, trying to get their guys isolated and get the linebackers out of there," he said. "We had quarterback draws, quarterback powers. We did it all. Our offensive line did such a great job opening up holes versus a very tough and physical D-line and linebacking corps. A lot of those lead draw were backs sticking in there against a linebacker, and that makes it all possible."

Sirk had tied the game at 43 by hitting Erich Schneider for 25 yards on the Blue Devils' first play of the last overtime.

On the 2-point conversion play, the Hokies were in the right defense, putting the onus on Sirk to make the play.

"Coach said if there's nothing there, don't force the throw. Tuck it and run," he said.

And the vaunted defense had put them in position to make the play the game-winner.

The Hokies had already scored a touchdown in the fourth overtime, but with the rules mandating that teams go for 2-point conversions after two overtimes, Michael Brewer rolled right and his attempt to sneak a pass into Isaiah Ford was knocked away by Deondre Singleton.

"I think the guy made a heck of a play knocking it away," Brewer said.

Virginia Tech (3-5, 1-3) lost for the fourth time in five games, and for the third time this season at home.

"I don't know that I've ever been part of a more heart-breaking loss," said Brewer, who returned to the starting lineup for the first time since breaking his left collarbone in a season-opening loss to No. 1 Ohio State. "At this point, we're playing for a bowl game."

Brewer finished 24 for 45 for 270 yards and three touchdowns, all to tight end Bucky Hodges.

The teams had traded field goals, then touchdowns, then field goals again through the first three overtimes.

The Hokies trailed almost all game, but two long second-half scoring drives drew them even.

The second covered 83 yards and tied it with 2:07 to play. Brewer's 23-yard touchdown pass to Hodges came on fourth-and-2. After the Blue Devils were twice called for pass interference on 2-point pass attempts, Travon McMillian ran it in to tie the game at 24-all.

Duke then drove to the Hokies' 28, a quick march highlighted by Sirk's 39-yard connection with Max McCaffrey, but when Virginia Tech's defense forced a fourth-and-3, Ross Martin hit the right upright with a 46-yard field goal try.

Martin also missed a 29-yarder, but connected from 41 yards for a 24-16 Blue Devils lead. Shaun Wilson's 58-yard touchdown run off an option toss from Sirk had given Duke a 21-10 lead early in the third quarter.

Virginia Tech pulled within 21-16 with a 20-play, 95-yard drive that took 9:46, the longest drive in the 29-year history of Frank Beamer's tenure as coach. McMillian finished it, taking a direct snap and running it in from the 2. The Hokies tried a 2-point conversion, and sent dual-threat quarterback Brenden Motley into the game to run the play, but his pass fluttered harmlessly to the ground, keeping it 21-16.

McMillian finished with 142 yards on 29 carries, all career highs.

The game looked like it might be a barnburner early with the first three drives leading to touchdowns.

The Blue Devils converted four third downs, the last with Sirk hitting Max McCaffrey from a yard out for a 7-0 lead. Brewer hit Hodges for 36 and 16 yards, the latter for a tying touchdown, and then Sirk hit Anthony Nash for 45 yards and Max McCaffrey for a 16-yard score.