'Durham Can' creates new vision for the city 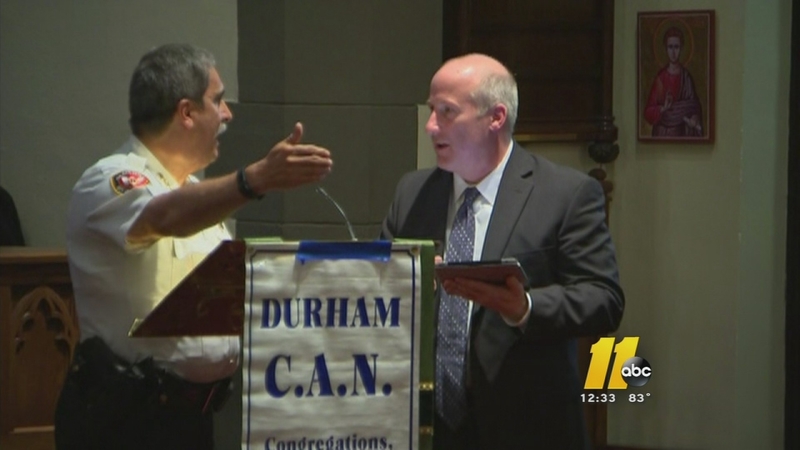 DURHAM (WTVD) -- State and local leaders are coming together to work on a new vision for Durham.

"Durham C.A.N." stands for Congregations, Associations, and Neighborhoods. The group bills itself as a non-partisan network of church groups and community members committed to improving the Bull City.

It was packed inside Durham's St. Phillip's Episcopal Church on Tuesday. It was a chance for Durham C.A.N. to look at the mayor, the police chief, the schools superintendent, city leaders and county leaders, all at once, and make their demands about how to make Durham better.

The group expressed fears of long-time residents being displaced by the new housing boom.

"Leadership is about bold decisions," said Rev. Mark Anthony Middleton. "And, we want our leaders to make a bold decision to have skyscrapers and to have affordable housing."

Other members spoke angrily about their frustration with drugs and gun violence.

"We have contacted the police over and over again- instead of things getting better, they've gotten worse", said Rev. William Luck.

The group wanted to engage Lopez in a public negotiation on its proposal to strengthen DPD's written consent search policy. The department has long faced accusations of racial profiling.

Chief Lopez insisted there was a never a deal for a public negotiation. He seemed visually frustrated when called to the podium, expressing the group was putting him in an "improper" position.

"When I was invited to this, I was not invited to speak," Chief Lopez said. "You're trying to get me to commit to something right now."

There were more moans and hisses directed at what some in the crowd thought were non-answers from the Chief. But, in the end, Lopez seemed to win the crowd back.

"Take a leap of faith and start trusting this police department and working with us- so that we can make a change," Lopez told the audience. "The only way the Police Department is gonna be able to make a difference is with a group like this to stand up and say, 'yes we can!'"

Durham C.A.N is aiming to become a political force in the city. The group announced results from its first round of fundraising efforts: Nearly $200,000 in donations, pledges, and grants.