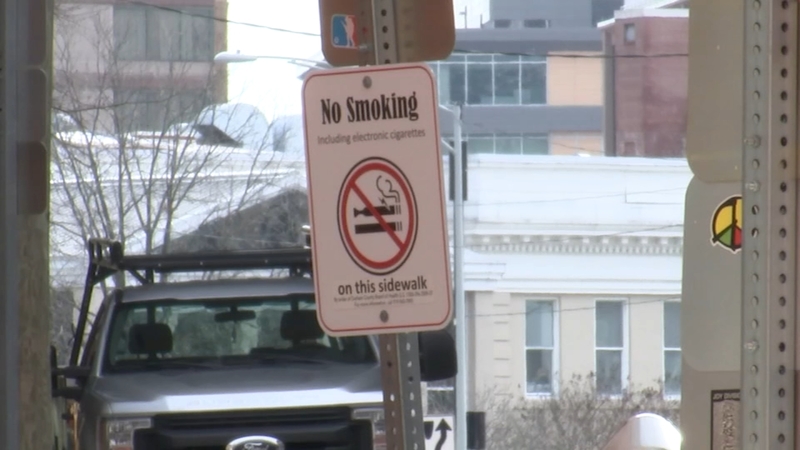 DURHAM, N.C. (WTVD) -- Durham has deep roots in the soil that produced tobacco, and marketing the leaf helped make the Bull City the fast-growing metropolis it is today.

But Monday, as boosters push Durham's modern image as The City of Medicine, reminders of tobacco's toxic effects were posted on downtown streets. "No smoking, including electronic cigarettes, on this sidewalk" is the message on more than 100 signs posted around town.

The message, from the Durham County Health Department, could affect people like Vernadell Carrington.

The signs are part of the county's effort to educate the public. The health department developed rules to regulate smoking in public areas, including sidewalks and parks, years ago. Michael Scott of the National African American Tobacco Prevention Network was the county's tobacco educator at the time.

"While I was there, the enforcement piece was more about education and then referring folks, if they're interested, to smoking cessation classes," said Scott. "Classes where they could learn how to quit smoking."

Carrington, who started smoking as a teenager, said it's a hard habit to break as an adult. "I'm trying to quit, because I have diabetes."

She said the signs could help her on her journey away from tobacco use. "My thing is, I don't smoke inside my house," Carrington said.

The rules, part of an ordinance regulating smoking in Durham's public areas, call for a $50 fine if a smoker is cited by "a person authorized by...County Commissioners or the City Council" but does not specify who that person might be.

But Scott, the tobacco opponent who applauded the use of the signs, said, "We're not trying to punish folks for being addicted to a product that was created to addict them. So it's about protecting the public health, educating folks to where smoking is not allowed."
Report a correction or typo
Related topics:
health & fitnessdurhamdurham countysmokinge cigarettesvapingcigarettesdurham county news
Copyright © 2022 WTVD-TV. All Rights Reserved.
TOP STORIES
Smith, Raanta, Hurricanes top Rangers for 2-0 series lead
Canes fans pile into PNC for Game 2 despite COVID resurgence
Parents share mixed reactions over plans for boosters for children
Fayetteville PD on track to full staffing; what about Durham, Raleigh?
Mail delays blamed on dog, owner claims case of mistaken identity
Body found on the bank of the Tar River in Edgecombe County
Wake Schools bus driver charged with driving bus while impaired
Show More
'Thrilled to death': Princeton man wins Cash 5 jackpot
Raleigh breaks heat record set in 1938
Raleigh resident from Buffalo, NY weary one week after massacre
Judge: COVID-19 asylum restrictions must continue on US-Mexico border
A motorcycle's unforgettable ride back home
More TOP STORIES News