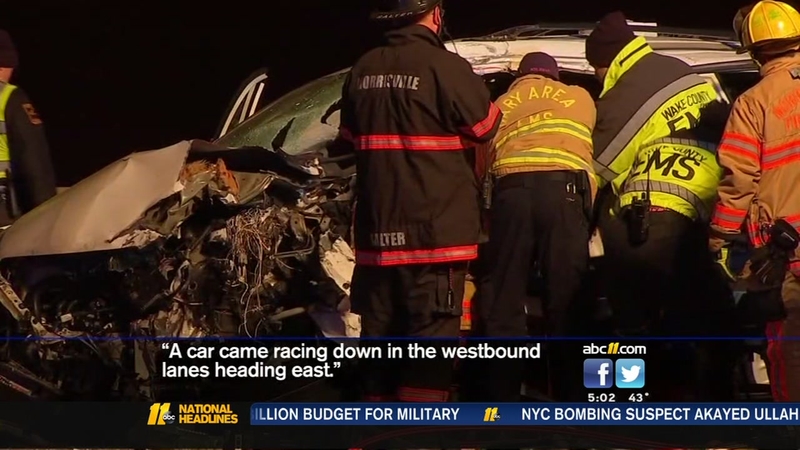 Authorities tell ABC11 that the driver, 25-year-old Qianyu Hang, was going the wrong way down the interstate when they collided with a FedEx semi-truck.

Wrong way driver shuts down part of WB 40 at exit 282... driver of this car is in critical but stable condition at Duke.

Driver of other Vehicle appears to be okay. The latest on @ABC11_WTVD #abc11 pic.twitter.com/yuOTTETj2Z

Authorities said there had been 911 calls about Hang driving the wrong way before the crash.

Officials said he was taken to the hospital in critical condition and had just got a North Carolina driver's license a few weeks ago.

The driver of the truck, 68-year-old Tyrone Hines, was not hurt.

Several lanes of I-40 were blocked for several hours as authorities cleared the scene.

FedEx has issued this statement:

"Our thoughts and prayers are with the families of those involved in this accident, and we are cooperating with local officials as they investigate. In cases of damaged freight, we have measures in place to immediately recover as much as possible and communicate with our customers."
Report a correction or typo
Related topics:
durham countyi 40crash
Copyright © 2022 WTVD-TV. All Rights Reserved.
TOP STORIES
Russia's claim of Mariupol's capture fuels concern for POWs
Man charged in Hope Mills double murder
Some peanut butter recalled for potential salmonella
Smith, Raanta, Hurricanes top Rangers for 2-0 series lead
First formula flights from Europe to arrive this weekend
1 person in hospital after shooting overnight in Raleigh
Dog battles mountain lion to save owner's life
Show More
'Absolutely terrified' teen boy dies hours after 'sextortion' scam
Parents share mixed reactions over plans for boosters for children
Wake Schools bus driver charged with driving bus while impaired
Fayetteville PD on track to full staffing; what about Durham, Raleigh?
Mail delays blamed on dog, owner claims case of mistaken identity
More TOP STORIES News