Durham's Hayti community: A Black business mecca crushed by empty promises reckons with the past 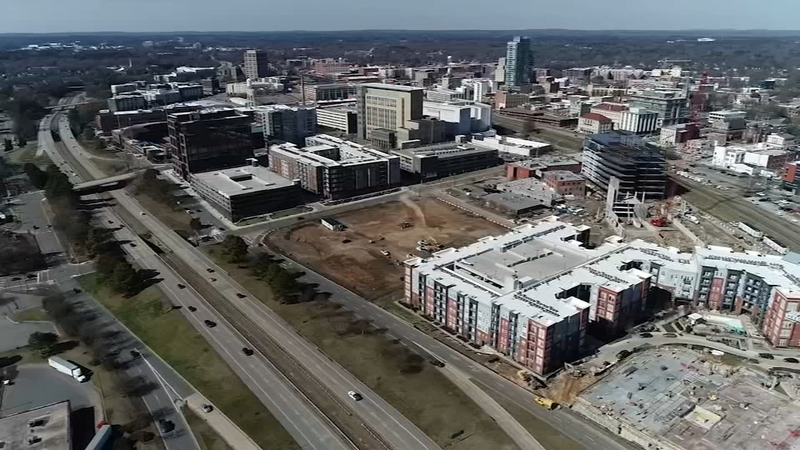 Durham's Hayti community: A Black business mecca crushed by empty promises reckons with the past

DURHAM, N.C. (WTVD) -- It has been 51 years since the first cars drove down a newly-constructed Durham Freeway, linking downtown Durham to the new Research Triangle Park. But the highway's construction came at a cost still felt today -- the freeway tore through homes, businesses, and up-ended lives.

The overwhelming majority of those up-ended lives were Black lives.

Anita Scott Neville thinks about her father every time she drives down Fayetteville Street, across the Durham Freeway overpass and onto Pettigrew Street.

"(My father) would pull up in his truck, park over here and say, 'Baby, watch the traffic,' and we'd go across the street here," Neville recalled as she pointed to block of Pettigrew where new upscale residences are now built with more on the way.

Neville's father, Joseph Scott, owner of Turner's Beauty and Barber Supply, was one of the hundreds of Black entrepreneurs thriving in what was Durham's African American commercial heart.

This village of Black commercialism stretching from Umstead Street to Pettigrew side by side with residences of the Black business barons of the day and the more modest homes of Hayti's working poor was built out of necessity. Jim Crow segregation was the rule: white owned businesses neighborhoods in Durham were off-limits. So Black Durham built itself a place to thrive.

But what Hayti was and what it became, more often than not, is traced back to the Durham Freeway.

"It was really the installation of that highway that decimated the community. And it was never the same," said Angela Lee, executive director of Hayti Heritage Center, the nonprofit cultural arts and arts education group that operates in one of Hayti's oldest original structures, St. Joseph's AME Church. The church was once the center of Hayti on Fayetteville Street. Now, it's all that's left of old Hayti -- steps away from a highway exit.

"They bulldozed a lot of the homes and put up apartments. Some of the businesses either returned, relocated, reinvented themselves or were altogether gone," Lee said of the years-long freeway construction project which ended with the freeway becoming a barrier through the center Hayti. "We went from segregation to desegregation to segregation with the highway."

It wasn't supposed to be this way. The 1950's ushered in a new era of federally-funded urban renewal - millions in government dollars to demolish and clear so-called blighted areas.

It took a monumental team effort -- decades of record gathering and researching -- plus a year filled with social and racial unrest before Major League Baseball finally recognized the statistics and achievements of Negro League players.

Durham city leaders, eager to build faster route from downtown to RDU Airport and a burgeoning Research Triangle Park, convinced Black leaders in Hayti that urban renewal and the new freeway through their community would mean new housing, new commercial developments and major infrastructure improvements. The citywide highway bond referendum passed with 90% of the Black vote.

"They believed the highway was going to be an economic boon for the community. In fact, it was just the opposite," Lee said.

"When we look at who was displaced by urban renewal and the construction of highways. They found ways to skirt affluent communities, but there was incentive to go through the heart of Black communities."

"Right now the community just feels a lot of mistrust and well they should. And this is coming at a time when we're seeing mass gentrification," Shabu said.

Today's downtown renaissance in Durham is fueled by new growth: 20 people move here each day. But in Hayti, it's a tale of two sides of the freeway.

To the south of the freeway, efforts are underway to win funding for a pedestrian path -- recreating the one-time easy walk into the city center.

"There's about 18,000 cars that come through this intersection every day," Lee described. "We want to be able to walk safely and have nice sidewalks, lighting, landscapes and art."

North Carolina Central University's reputation attracts talent and resources at home as well as from outside the state's borders.

But it's a different story north of 147, closer to downtown. The Pettigrew Street of old Hayti has been long-demolished, including Neville's father's beauty and barber supply shop. Luxury apartments are now in its place with new neighbors with little knowledge of the neighborhood's past.

"I have to be honest and talk about a level of resentment," Neville said. "There's an homage to be paid in a very real way. And that spirit is still alive in Durham."