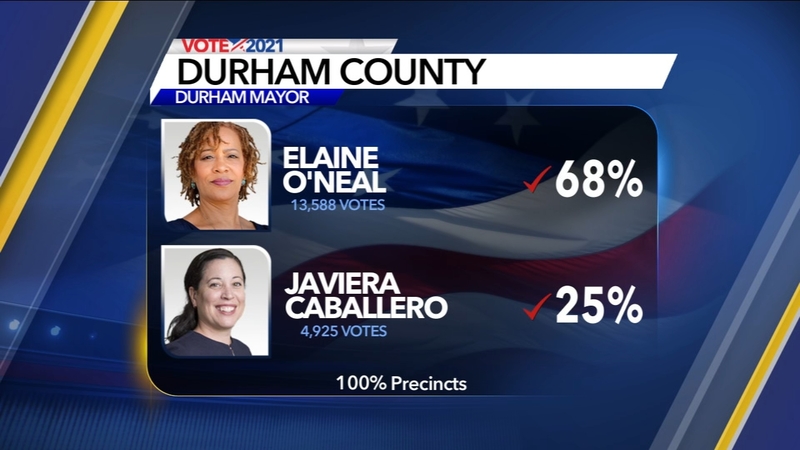 O'Neal, Caballero to face off for Durham mayor: What to know

Seven mayoral hopefuls were on the ballot.


With 95% of the total votes in, Elaine O'Neal and Javiera Caballero are the projected winners of the primary.

O'Neal, a retired judge, has the endorsement of Friends of Durham and the Durham Committee on the Affairs of Black People. Her priorities include addressing transportation needs, housing insecurity and poverty in Durham. She has personal experience with gun violence after shots killed her 22-year-old cousin last November. She says more jobs could help reduce that violence as well as poverty rates.


"You've got to know your role, you got to understand your role, you've got to be willing to compromise, you've got to be willing to listen. And in my opinion, Judge Elaine O'Neill is best suited to do that," former mayor Bill Bell said.
Caballero is a member of Durham's city council and is endorsed by the Durham People's Alliance. Her priorities include housing affordability, community safety provided by well-trained, well-paid police officers, infrastructure and transit system improvements. She also wants the city government to be more responsive and inclusive regarding immigrants and refugees who live in Durham.

Slightly more than 4 percent of voters cast their votes early.

The two people with the most votes will face off in November's general election.


The pandemic meant no big primary watch parties. Instead, O'Neal had a small virtual event with supporters then spoke to ABC11's Joel Brown about the upcoming mayoral showdown.

"I am feeling very excited, just proud and humbled of, you know, by my community support," said O'Neal. "I've never lived anywhere else. I've been educated here in Durham. Everything that I've been doing has been about being a public servant. And but I think at this pivotal time in Durham, community safety is a priority for most of us. And I think that in that arena, I've lived in that arena from the bench for 24 years."

O'Neal's opponent Javiera Caballero has served on the City Council since 2018, when she was appointed to fill Durham Mayor Steve Schewel's old seat.

ABC11's Joel Brown asked Caballero about her plan to solve Durham's crime problems. Some critics have accused her of wanted to defund the police, but she pushed back on that Tuesday.

"Last fall the 911 call analysis that we did said the overwhelming number of calls that come to our call center are not about violent crime," said Caballero. "So if we can focus on taking those responsibilities of our police officers plates -- then it lets us let them actually drill down into the kind of work that we know that they need to do-- the core work which is to help solve violent crime that we know causes so much pain and suffering."
Report a correction or typo
Related topics:
politicsdurhamelection dayelectionthe mayor
Copyright © 2022 WTVD-TV. All Rights Reserved.
TOP STORIES
Toddler and man killed in Raleigh apartment shooting, woman hurt
Gas prices decline in Raleigh but experts worry about meaning of dip
Sticker shock for young would-be renters as apartment leases spike
Man dies hours after shooting at Raleigh gas station
Grandfather of woman shot by Fayetteville police searches for justice
What to know if your flight gets canceled or delayed
Raleigh City Council adopts 'social districts' ordinance
Show More
Raleigh woman recovering, arrest made in San Diego shooting
Couple fined $1,500 for parking in own driveway
Creedmoor rallies around family that lost everything in house fire
DHS warned of 'heightened threat environment' before parade shooting
Parents of late NFL star Demaryius Thomas reveal he had Stage 2 CTE
More TOP STORIES News