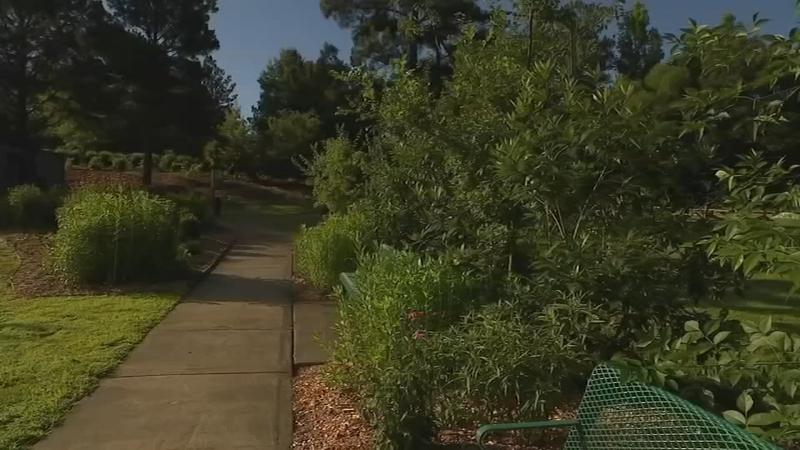 Larry Stogner's honored with a landscaped garden in Durham

DURHAM, N.C. (WTVD) -- Tucked inside Durham's Sandy Creek Park is a new attraction longtime ABC11 viewers will appreciate. It's a place those who watched Larry Stogner anchor the news on TV could see him as a regular guy, enjoying nature.

"When we got our puppies in 2006, he came out here every single day, for 10 years," said his widow, Bobbi Stogner. "It was a great park for dogs, but it was also a great physical park. It's been well taken care of and maintained for people to walk. Trails that are not muddy."

Larry himself helped to clean up the park before ALS claimed his life in 2016. Now, his familiar smile is on a sign that greets visitors as they stroll through the Larry Stogner History Park and Garden.

"This is such a great tribute to Larry. Before he came into the newsroom every day, he came here," said ABC11's president and general manager Rob Elmore. "And it remains to this day such a great to come to exercise, to come to clear out your head."

"If Larry were here, he would be in tears with gratitude," Bobbi Stogner said.

The extensively landscaped garden is especially appreciated by Larry's friends, family and supporters who came to Sandy Creek Park for the garden's dedication on Saturday.

"Mr. Stogner's legacy reminded us of all about the power of parks, and the role they play in our everyday lives to improve our overall health and wellness," Wade Walcutt of Durham Parks and Recreation told the crowd.

Organizers said they planned to pave a trail and name that after Larry; but when that plan fell through, they pivoted and met with Durham Parks and Recreation to convert a section of park that people could not access into a history grove. The program for Saturday's dedication says:

"We raised slightly over $15,000 from friends, neighbors, and other friends of Larry, including a friend and colleague of Larry's at Disney/ABC, who made a significant donation."

More funding was made possible.

"By the generous donations from our viewers. So, getting the message out about what was happening here was important to us, and it's so great to see it finally happen," said Elmore.
"And the fact that it's an ADA accessible park, so that those who come after him will have a place where they feel comfortable and safe while enjoying the outdoors," Bobbi Stogner added. "A place where physical challenges can find rest, a place where spiritual challenges can find peace and serenity."

One friend of the Stogner's described the area before the makeover as "kind of a dump." The transformation is appreciated by those who saw it during the dedication of the garden.

"Obviously a lot's happened since this used to be a sewer plant," said John Goebel of the Friends of Sandy Creek Park. "I say that because where most of you are standing now, three years ago there was a huge ugly tank."

That tank's just a memory now, replaced by lush plants, shrubs and other features that invite you spend time exploring, or sitting on a bench inside the garden where you can relax and enjoy the view on a pretty day.

"Thanks, from the bottom of our heart," Bobbi Stogner said. "To everyone involved in putting this project together!"