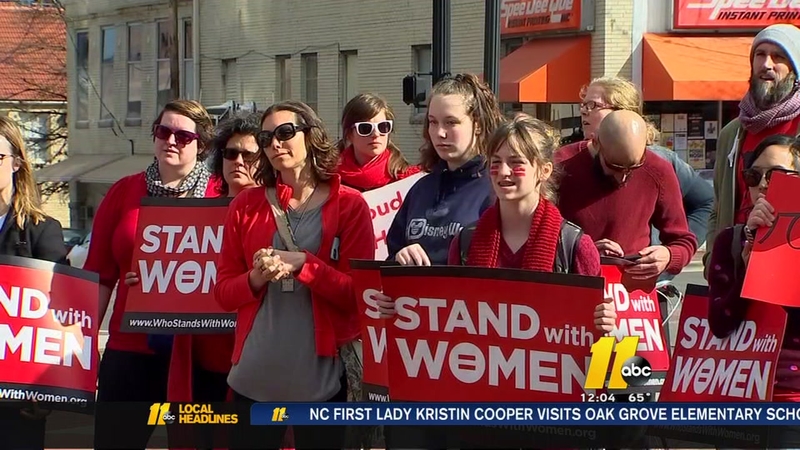 The rallies on International Women's Day were part of a national movement referred to as a "Day Without a Woman."

Nearly 100 people were at the Bull City's CCB Plaza for what they called "Our Day of Strike" demonstration.

"Show my daughter, which is what my mom showed me, to stand up for what I believe is right, make a difference and have a say," said Nashonda Cooke, a Durham Middle School teacher. "We are not gonna be stopped or intimidated. And we are going let our legislators know that there are some changes that have to be done! We're not gonna stand by and let them make decisions that are gonna harm our families."

The strike was meant to emphasize the role of women in national life. Women in the United States were asked to take the day off and not spend their money in an effort to show their economic power and impact on American society.

"A Day Without a Woman (recognizes) the enormous value that women of all backgrounds add to our socio-economic system--while receiving lower wages and experiencing greater inequities, vulnerability to discrimination, sexual harassment, and job insecurity," stated event organizers on their website.

Organizers of the protest said they hoped to stress the contributions women make in daily life, both paid and unpaid. A similar demonstration called "A Day Without Immigrants" took place in February.

READ MORE: Day Without Immigrants protests in Triangle, across US

Organizers said they recognized that some women were not able to take Wednesday off, however, the national protest did prompt Chapel Hill-Carrboro Schools to close its doors.

District officials canceled classes because principals and other supervisors said they expected a high rate of staff absences Wednesday, making it difficult to teach or to provide transportation and food services.

"I think that's a terrific opportunity to, to support their employees, to serve as role models for children, said Chapel Hill resident Edie Hopfenberg. "I think it shows how people in all walks of life can get involved in the system and make a difference."

Officials with Chapel Hill-Carrboro Schools said it values and supports its female employees, but the decision to close schools was not an endorsement of the planned demonstration.

"I am taking a personal leave day," Cooke said. "I am paying for that out of my own pocket, but I feel like it's worth it."