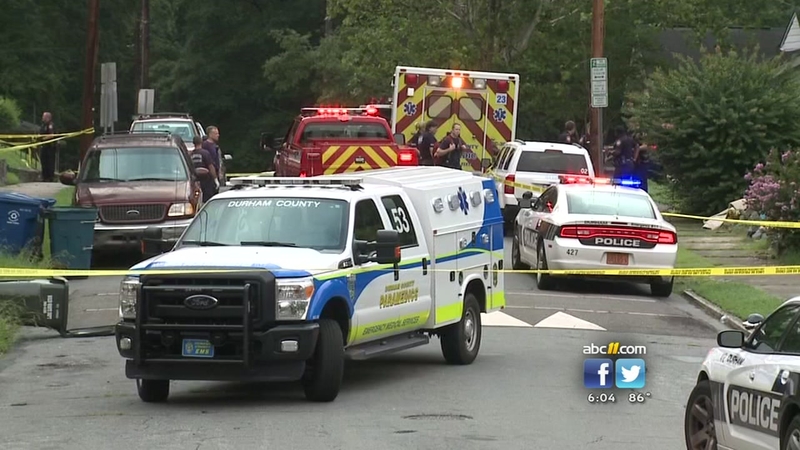 DURHAM (WTVD) -- Durham police were called to the 600 block of Dunbar Street early Saturday morning where they found a man's body on a retiree's front lawn.

While they began their investigation calling his death suspicious, word that the body had a gunshot wound spread quickly. Police said Sunday they were investigating it as a homicide.

The homeowner said, as she watched neighbors turn the body over, there was no sign of life.

Authorities identified the victim as Jamie Nathaniel Daniels, 33, of Durham.

ABC11's Anthony Wilson spoke to neighbors who were shocked the violence is leaking into their quiet neighborhood.

Community activist Paul Scott spoke to ABC11 last week about the toll gun violence is taking in some of Durham's minority communities.

After hearing about the latest shooting, Scott spoke for many when he said, "people are fed up!"

He said that in the shadow of a major downtown improvement project, an old motel that investors are converting to an upscale, boutique hotel. Not far away, diverse crowds strolled through Durham's downtown or waited for seats at the city's popular Main Street restaurants.

Minister Scott believes those who live in fear elsewhere in Durham could find strength in unity.

"We need to come together as a community," he said, "because Durham is better than this! When people see Durham on the news or read about it in the newspapers, it's always about murders, always about someone being shot."

The 73-year-old owner of the home where the body was found didn't want her face on the news.

"I'm not used to this! That's the only thing I can say, and the neighbors need to start speaking up," she told ABC11 off-camera.

One neighbor, Primer Long, just moved into the neighborhood. He is frustrated that arguments so often culminate in gun violence.

"You got beef with somebody, just work it out," Long suggested. "Talk it out! But you gotta shoot somebody, over nonsense? We don't even know what happened!"

While he and others want those who know what happened to tell police, it's easier said than done. People of all ages are afraid to appear on camera talking about something like this.

Others who've had enough urge eyewitnesses to call Crimestoppers.