'We are all Uvalde': Leaders hold vigils in Durham, Raleigh for the school massacre victims in Texas 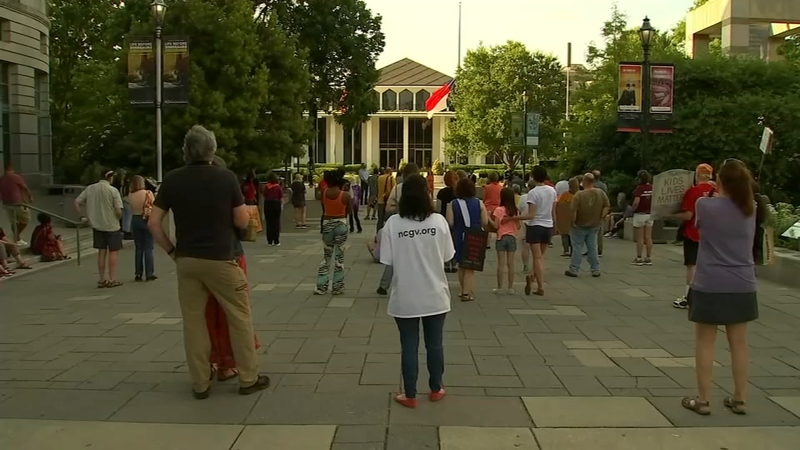 DURHAM, N.C. (WTVD) -- At dusk in Durham, moms, dad, sons and daughters gathered for a collective catharsis. Some held signs. All of them lit candles, in memory of the slain grade schoolers and teachers murdered in mass all those miles away in southwest Texas.

"We stand in Durham tonight. But tonight, we are all Uvalde," Durham Mayor Pro tem Mark-Anthony Middleton told the crowd on CCB Plaza.

Durham faith leaders led the crowd in prayers of comfort in English and Spanish.

"We know that You are near those whose hearts are broken terribly," they prayed.

“We stand in Durham tonight. But tonight, we are all Uvalde.” #abc11 pic.twitter.com/VvrnwsAMsE

Meanwhile in Raleigh, it was a call to action on Bicentennial Mall.

"I urge you to get involved. Do not walk away and go home and enjoy your barbecues on Sunday," Carolina Peace Center Founder Faisal Khan said.

Khan organized the demonstration and news conference outside the state legislature.

Chantel Felder, a gun violence survivor who lost her brother to a shooting seven years ago, told the crowd she was traumatized all over again on Wednesday when she pulled in to her daughter's school.

"Yesterday morning, I cried dropping my daughter off at school. I wasn't taking her to a warzone. I was taking her to school. And I cried," Felder said.

Back in Durham, the refrain was much like the one in Raleigh: Uvalde was a horror. What are we going to do?

"Their light will push us to push City Hall - to push Raleigh - to push Washington, D.C. to act in their name," Middleton said.