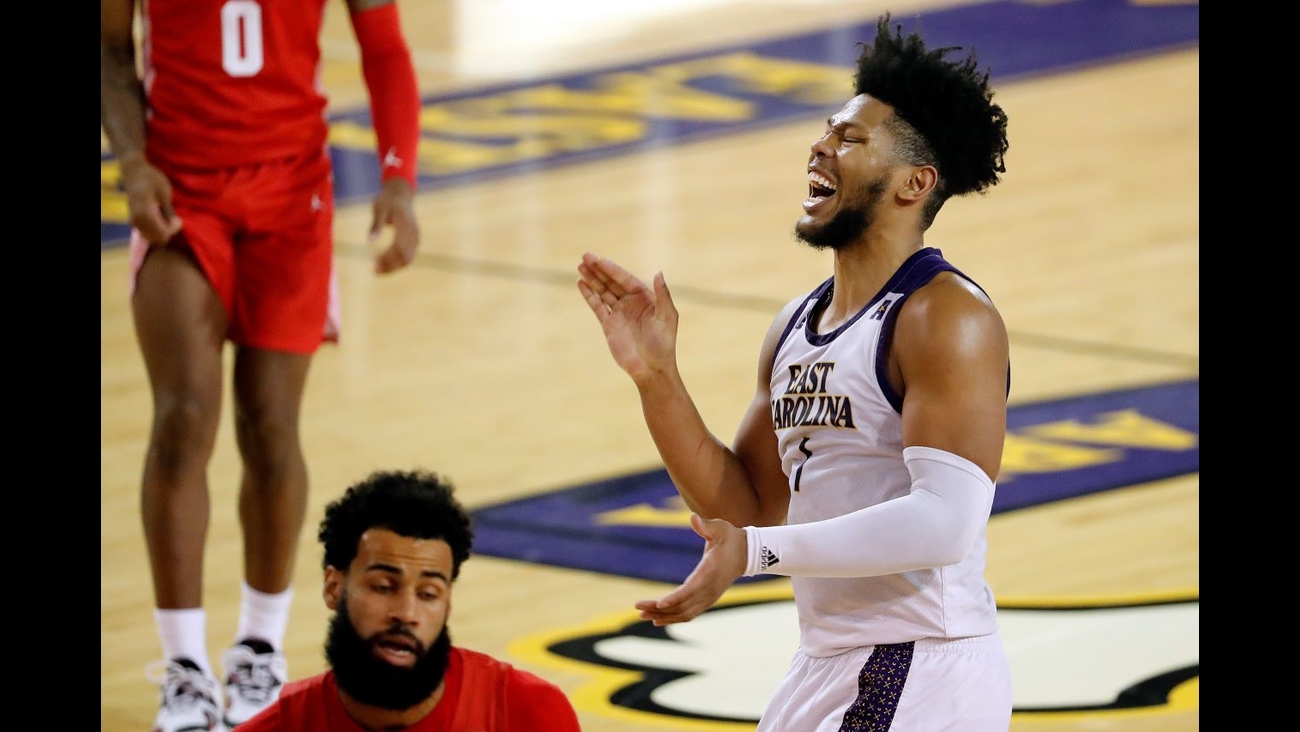 ECU's Jayden Gardner celebrates as the game winds down and the Pirates secure a stunning win against No. 5 Houston on Wednesday. (Karl B DeBlaker)

Tremont Robinson-White added 17 points for East Carolina, which defied season-long offensive struggles against one of the nation's top defensive teams. East Carolina shot 47% and made 11 of 24 3-pointers - and more impressively, the Pirates led for the last 12-plus minutes against a Houston team that struggled to make much of anything after halftime.

East Carolina (8-6, 2-6 American Athletic Conference) hadn't won a game in more than a month between five straight losses and three postponements. But the Pirates found an unforgettable way to end a 33-game losing streak against AP Top 25 teams, though it came with no fans to storm the court in celebration and only a limited number of attendees in Minges Coliseum due to the coronavirus pandemic.

Houston (15-2, 10-2) came in as KenPom's No. 2-ranked defense, allowing 86 points per 100 possessions, while also ranking as one of the nation's top rebounding teams. But the Cougars didn't do much to hold down the Pirates in either category while their offense sputtered.

DeJon Jarreau matched his career-high with 25 points to lead the Cougars, who had won nine straight meetings dating to 2015, including wins by double-digit margins on ECU's home floor in each of the past four seasons. But top scorer Quentin Grimes struggled to just seven points on 2-for-10 shooting.

Houston: The Cougars moved to No. 5 in Monday's latest AP Top 25, marking their second stint there this season. That's the program's highest ranking since the 1983-84 season that ended with the Hakeem Olajuwon-led Cougars reaching the NCAA title game. They had also won all eight of their games since the start of 2021. But they made just 8 of 31 shots after halftime (25.8%) while finishing with a 37-36 rebounding edge.

ECU: East Carolina hadn't won since beating Tulane at home on Dec. 22. And the Pirates hadn't beaten a ranked team since upsetting a Dwyane Wade-led Marquette team ranked 13th in December 2002. Those skids are over.

Houston: The Cougars host NAIA program Our Lady of the Lake on Saturday, a game added to the schedule Wednesday. Houston then returns to AAC play by visiting South Florida next Wednesday.