WTVD
APEX, N.C. (WTVD) -- There were heated exchanges between parents and a handful of Wake County School Board members in Apex High School's cafeteria Tuesday as the board took feedback on a new student assignment proposal.

"We're not going to stand here tonight and tell you OK because you yell at us - we're going to change that," said board member Sue Evans to the crowd of more than 300 parents.

The debate came over the second draft of the latest plan that reduces student population at schools in western Wake County through three new schools slated to open in the 2015-16 year. Scott Ridge Elementary and Apex Friendship High will open in Apex. Abbotts Creek Elementary will open in North Raleigh.

Most of the parents on hand were concerned about their rising sophomores transferring from Holly Springs and Apex High Schools into Apex Friendship.

"A bus would have to pick those kids up at 5:45 in the morning to attend school. That's three hours per day on a school bus when the kids can be focusing on academics," said Heather Deshazor, who told ABC11 the new school is three times farther away from her house than Holly Springs High.

Other parents like Deborah Elmore said she's concerned her Apex High Schooler will not get the advanced college courses he needs since he will transfer in as a sophomore. The school system has assured her there will not be a problem.

"That's not a good enough assurance for me that my student will be able to get what he needs to apply to a good college or university and get what he wants out of the future," Elmore said.

Parents have gone to the district's student assignment website to lobby for the same grandfathering rules used last year, but the school board told them those rules will not apply.

Parents were initially angry because they said they thought the school board members on hand weren't answering their questions directly, but the discussion cooled off significantly when the crowd broke up into smaller groups.

The hope is that feedback from Tuesday's meeting, which is the second of four community meetings, will help school officials make adjustments.

The next meeting is Oct. 16 Thursday at Millbrook High School.

A final draft is expected in November, with the school board voting in December. 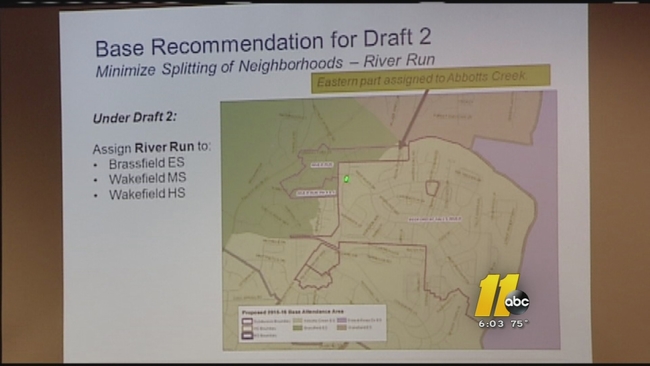