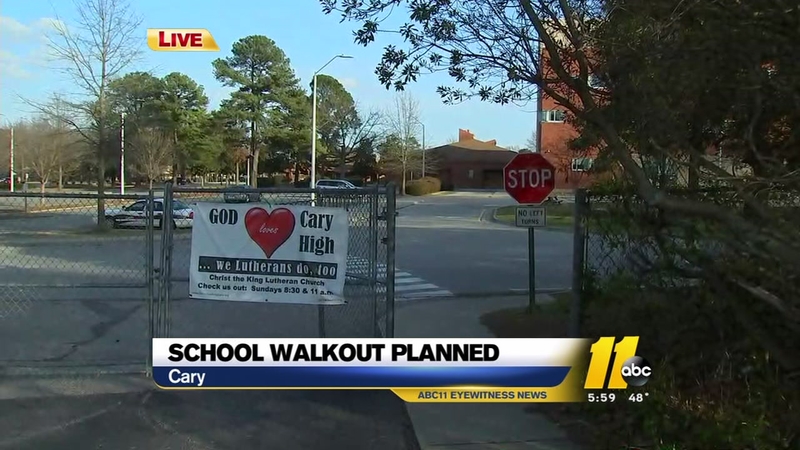 HOLLY SPRINGS, NC (WTVD) -- Wednesday marks one month since the shooting at a Florida high school that killed 17.

And walkouts at schools across the country are planned for 10 a.m. Eastern.

Most are scheduled for 17 minutes to honor those who died at Marjory Stoneman Douglas High School in Parkland, Florida.

That includes one at Holly Springs High School.

"We are the change. We are the revolution," Holly Springs HS senior Alexa Clymer told ABC11.

Clymer, one of the walkout organizers, is 18 and remembers the 2012 shooting at the Sandy Hook elementary school that killed 20 first-graders.

She said she remembers that despite a push back then, little changed.

"They were not old enough to speak out and defend themselves. Their parents had to do it and frankly, people didn't listen to their parents. And there was not legislation changed after that happened," Clymer said, and she added, "and now what we're seeing with these Parkland students is that they're brave and they're amazing, and they're coming out strong and they're doing everything right.

Her mother, who says she's not very political, notes her daughter has convinced even her that this time things are different.

"I feel like for some reason it has more momentum and I think that's because these students have kind of taken this on their own and not just relied on the adults," Karen Clymer said.

Madhavi Krevat is the mother of an Apex High School student.

"My daughter came to me after the shooting and she said that she was afraid to go to school. I don't want that for her. I want her to be happy. I want her to feel safe. And right now she doesn't," Krevat said.

And the truth is that the Florida shooting affected her, too.

"When I dropped her off the day after the shooting, I cried all the way home because I didn't want to drop her off," she said. "I was afraid for her safety."

So Krevat was happy when her daughter, who in the past seemed to shun any talk of politics, said she wanted to attend Wednesday's walkout.

"I think it's important that the children need to speak. This is their lives that we're talking about. They're the ones that are most affected."

But all involved in the walkouts agree that while there appears to be momentum this time around, the only place that concerned young people can really show their clout is at the ballot box.