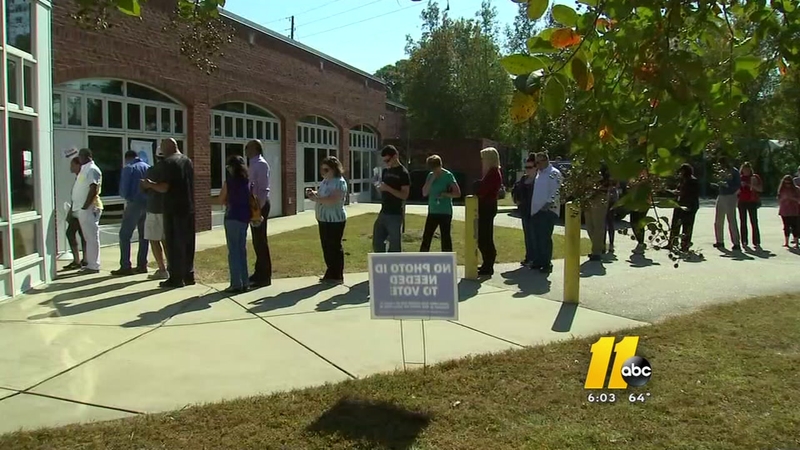 WAKE COUNTY (WTVD) -- Wake County elections officials said it was an "administrative slip-up" that led to two Republican observers being kept out of an early voting site in Apex.

Maria Isley said she and her husband were signed up properly and should have been on the list of approved observers at the Apex Community Center on October 30, but were told by elections workers that they were not on the list and would have to observe outside.

Elections officials agreed with the Isley's version of events.

"Their names were not appearing on the list that we had provided to the early polling site due to an administrative slip-up," said Nicole Shumaker, with the Wake County Board of Elections.

Isley told ABC11 she felt she and her husband may have been targeted by poll workers in an effort to curb the number of Republican observers watching early voting.

Shumaker vigorously denied the suggestion that this was anything other than a typo, effectively.

"It was an isolated incident. This is our 12th day of early voting now that we're into and we've had observers at all 20 locations and we haven't had any other issues with observers getting access to the polls," Shumaker explained.

Voters concerned that there are too few Republican eyes watching early voting have at least one reason to breathe easy: They vastly outnumber their Democratic counterparts.

Political parties both select and sign up elections observers. They're allowed to put two observers at each site each day of early voting. They have to stay at their respective polling locations but political parties can also have up to 10 "free agents" that can roam all early voting sites in the county freely. The rule constraining these free agents: Only one can be at a polling location at any given time.

When it comes to elections observers in Wake County, Republicans outnumber Democrats 10 to 1 and voters ABC11 talked to weren't surprised.

For Alec Jones from Apex, the fact elections workers tilt conservative came as no surprise.
"That makes me think that maybe the Republicans are worried more about voter fraud than the Democrats are," Jones said, noting that they hear that message trumpeted loudly and frequently from the man at the top of the ticket.

But Jones, a first-time early voter, said going through the process gave him a sense of security he didn't have heading to the polls.

"Actually I was very worried. And when I went in to give my name, when I gave my first and last name, they knew where I live, who I was, and they verified it. And when I came through, they certified the ballot. And I wrote down the number on my ballot. I want to make sure I'm counted."

Pressed on whether he thinks elections officials did enough to ensure the integrity of the ballot, Jones said, "I think everything is accountable. They're checking and they're double checking. So I'm confident, I'm kinda confident in the way the election is going."

But Jessica Gannon, also a first time early voter from Fuquay, had a different opinion about the integrity of the elections process.

The fact that voters in North Carolina don't have to show an ID at the polls was the focus of a long and hard fought court battle in North Carolina. The Republican-led legislature passed a bill that would have required voters to have an ID at the polls but earlier this year, a judge ruled that unconstitutional. Now, signs are posted at early voting locations around the state informing voters they don't need an ID.