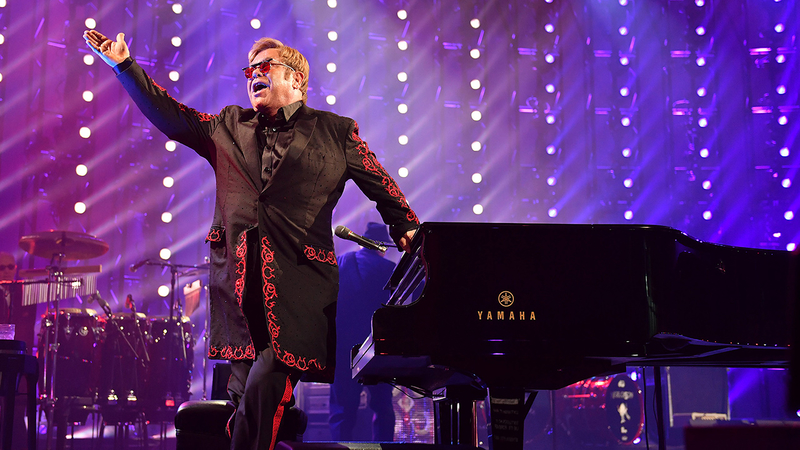 NEW YORK -- After decades of touring, Sir Elton John says he is retiring from the road after one final world tour beginning in September.

The 70-year-old entertainer made the announcement at a news conference at YouTube's headquarters in New York City.

The "Rocket Man" was a road warrior, seemingly unstoppable for a half -century, a living embodiment of the old maxim: the show must go on.

The Goodbye Yellow Brick Road Tour will cover 300 dates going around the world over three years, he says.

The singer says the tour is "a way to go out with a bang."

His familiar tunes will remain part of the soundtrack of our lives, but a health scare last year put a halt to some of his stage performances.

Sir Elton was hospitalized in South America last March after contracting what was described as a "potentially deadly" bacterial infection while on-tour.
He was forced to cancel two months' worth of shows in Las Vegas and a May concert in California.

The rock icon said his health issues were not a factor in the decision. Sir Elton said he and his husband, David Furnish, made the decision a couple of years ago so they could spend more time together and with their two young sons. His children will be 10 and 8 years old when he stops performing.

The response to news of his farewell tour sent so much traffic to his website that it crashed.

I’m overwhelmed by the enthusiastic response to my last ever tour. Unfortunately, so is my website! https://t.co/Obt7e4fi35 will be fully back online as soon as possible. Deeply sorry for any inconvenience caused. Ex #EltonFarewellTour pic.twitter.com/1zlQ2rKF5X

Before launching the final tour, Sir Elton's show in Las Vegas, The Million Dollar Piano, will wrap up in May after a six-year run.

He is due to perform with Miley Cyrus at the Grammy Awards on Sunday in New York City and host a special concert in his honor at Madison Square Garden on Tuesday.

John, whose hits include "Your Song" and "Candle in the Wind," has won five Grammys, an Oscar and a Golden Globe for "The Lion King," a Tony Award for "Aida" and received a Kennedy Center Honor.