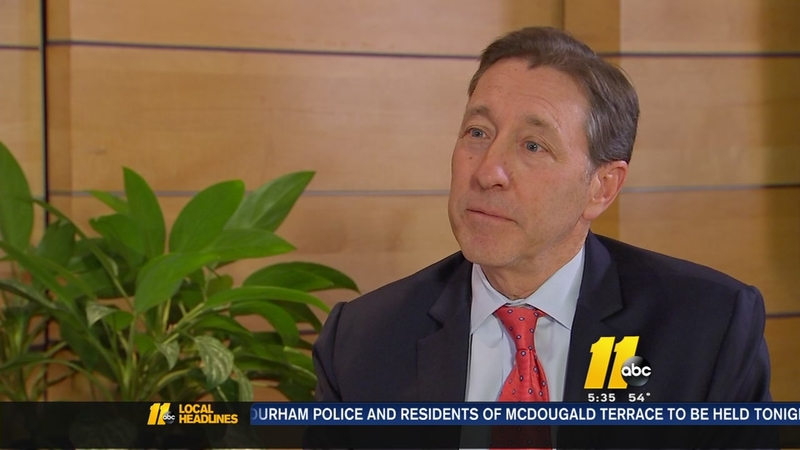 DURHAM (WTVD) -- Celebrating a record year for the V Foundation, board member George Bodenheimer pointed to the dream driving it all.

"We want to fund more research and our goal is to defeat cancer, fulfilling Jim's vision," he said.

Jim Valvano, after leading N.C. State to victory in the 1983 NCAA Men's Basketball Championship, lost his own battle with cancer, but not before delivering his iconic speech at the 1993 ESPY's.

Bodenheimer, the former president of ESPN, was in the room for that unforgettable moment.

"It was almost as if the cancer had left Jim's body for 10 minutes," Bodenheimer said. "He barely made it to New York, needed help getting up on stage and delivered the most heart-warming, heart-felt, powerful 10-minute speech I think you'll ever see."

Valvano's words reached then-NC State student Jenny Britt, whose own daughter Caroline, at only 5 years old, is coming out of a battle against cancer.

"I think about that all the time -- just never give up," Britt said. "You can never give up. You can't feel defeated. You have to know that you just keep pushing through and you'll make it."

Caroline was diagnosed with Stage Two high risk neuroblastoma in 2014. Now, after surgery and several rounds of chemo, she goes to Duke Cancer Center for scans every six months. All the while, research funded through the V Foundation continues.

"Tremendous strides are being made by these wonderful doctors and wonderful oncologists at Duke and elsewhere around the United States and giving people hope," Bodenheimer said. "More people are surviving with cancer than ever before."
One hundred percent of every dollar donated to the V Foundation goes directly to the doctors and researchers at cancer centers across the country.

In 2016, the V Foundation awarded a record $23 million in grants, including $1 million to Duke.

"It will benefit even Caroline moving forward just because of the side effects, things like that from cancer," Britt said.

It's the vision being passed down from one cancer fighter to another.

"She never gave up. She never said I can't do it, I won't do it," said Britt of her little girl. "I definitely think that we're on track to beat cancer through the V Foundation for sure."