North Carolina father and son to walk together at graduation 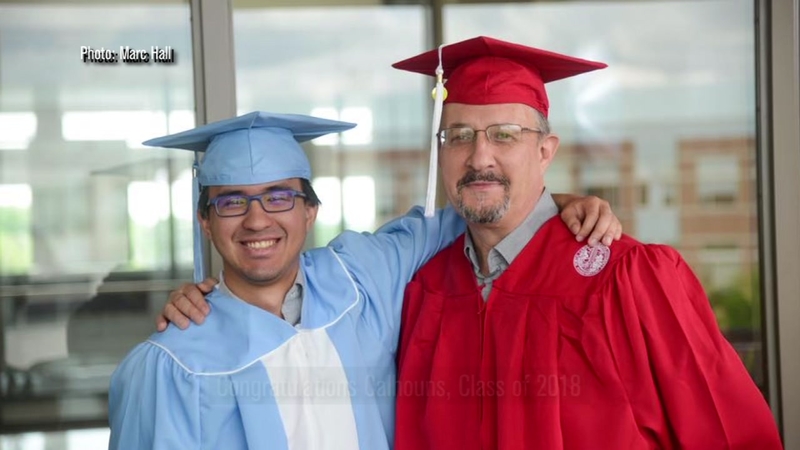 Father and son to walk together at graduation

Tim and David Calhoun have walked together through many trials over the years, and on Saturday, they'll walk together at graduation.

The father and son from Wilmington are receiving diplomas from the same biomedical engineering program offered jointly through UNC-Chapel Hill and N.C. State University.

Tim and David Calhoun will walk together at graduation on Saturday.

Tim, who will turn 57 years old before graduation day, should have died years ago.

"Two days after my forty-second birthday, I died in my sleep, sudden cardiac death," said Tim.

He credits his wife, a cardiologist, with saving his life. She performed CPR until an ambulance arrived.

Tim, who came out of a coma two days later with no cognitive damage, had a changed perspective.

Eventually, it led him to leave his career and attend Cape Fear Community College followed by N.C. State.

The man who was never fond of hospitals is now hoping for a job at one.

While Tim would tell you he has motivated his son, David, who introduced him to the biomedical engineering program, would say it's his dad who inspires him.

"It's one thing to go through the hospital and see other people who are patients, but when one of your own family members is a patient, it's suddenly that you realize that all the other people you're seeing in the hospital, they have families too," said David.

David said It's been a challenge since orientation at UNC.

"They told me everything I didn't want to hear," said David with a smile. "'You're gonna have a 2.5 GPA. You will not be able to study abroad. You will have no social life.'"

David, diagnosed with autism, had to take some time away from school, but he made it back just in time.

"At first, I was really disappointed in myself because I thought oh, I'm not good enough, I'm graduating one semester and now two semesters behind everyone I came here with," he said. "But what I came to realize is that even if that's the case, you can't just give up and call it quits. You gotta persevere and get out of here eventually and I think it's really lucky that I happen to be graduating with my father."

Sure there's some friendly rivalry, but nothing compares to turning tassels together.

"Every parent wants to see their child do well, graduate and have a good outlook in life," said Tim. "And the fact that he got me interested in this program, it was really special all by itself."

Etched across the diplomas Tim and David will receive will be the seals and signatures of both universities.

For these two, they'll share the same name as well.