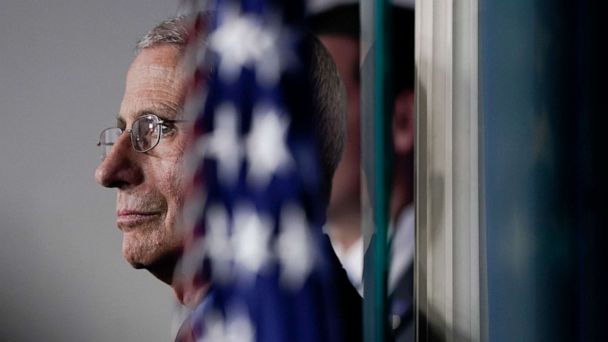 As the COVID-19 pandemic surges within the United States, the Trump administration's task force leading federal efforts to slow the spread of the virus continues to relay some optimistic messages in its meetings.

But according to Dr. Anthony Fauci, a key member of the task force as the nation's top infectious disease expert, those claims do not always match the reports he receives from the front lines of the crisis.


During an in-depth interview that will air Tuesday night on ABC News as part of a primetime special, "American Catastrophe: How Did We Get Here?," Fauci was pressed to explain why, months after COVID-19 first reached U.S. soil, the U.S. government is still struggling to provide adequate testing for Americans and sufficient personal protective gear for essential workers.

"We keep hearing when we go to these task force meetings that these [issues] are being corrected," Fauci said. "But yet when you go into the trenches, you still hear about that."

Fauci said he does not have a "good answer" and "cannot explain" the discrepancy, especially since those matters are not part of his "day-by-day" responsibilities, but part of the problem stems from the fact that "many of the things that we needed were not produced in the United States."

The U.S. government ended up competing for those materials with other nations stricken by the pandemic, and the White House ultimately had to invoke emergency powers to push U.S. companies to help.

Those challenges were exacerbated by what Fauci admitted were early missteps on testing by the Centers for Disease Control, which developed tests that "didn't work" initially because - it turned out - their results were based on potentially contaminated samples. That forced the federal government to further rely private companies.

Asked about any missteps he may have made himself - including initially telling the public that the average American didn't need to wear a mask - he said such decisions were "based on the information at the moment."

"As a scientist, the thing you must always do is to be humble enough to know that when you get additional information, even information that might conflict what was felt earlier on, you then change your viewpoint and you change your recommendations based on the data," he said. "That's what science is all about. Science is a learning process."

During a White House briefing on Thursday, President Donald Trump declared that the United States has seen "a tremendous increase" in its testing capabilities, conducting more than 51 million tests across the country so far, and insisted that the country is "very strong on supplies."

Trump also said it's been "a tremendous week" for the United States in the fight against COVID-19, insisting, "We're doing very well all over the country."

In his interview with ABC News, however, Fauci expressed concern over the "explosion" of cases in several southern states, which he said is being fueled by "a surge of community spread," in which people infected with the disease but not showing symptoms are spreading it to others.

It's "a real serious problem," he said. "They need to be concerned because even though they themselves may not get any serious outcome, they are part of the propagation of the pandemic."

The U.S. government, Fauci said, certainly wasn't the only one to make costly mistakes. In his interview with ABC News, Fauci said the Trump administration's response to the growing pandemic was significantly handicapped by the Chinese government's lack of candor during its initial spread throughout the country.

"We were still hearing from the Chinese that it wasn't efficiently spread from human to human," Fauci said. "And then as the weeks went by, it became very clear that that was the case, and that there really would be trouble."

The Chinese government even barred U.S. officials, Fauci said, from visiting the areas most impacted by the deadly virus.

"They were not allowed to go there in real-time and see what was going on," he said, and that "was very disconcerting to us."


It wasn't until January, when the Chinese government finally released the scientific makeup of the virus, that Fauci fully realized the gravity of the situation.

"All right," he recalled thinking at the time. "All hands on deck."

"You have those two things coming together with what we're dealing with now" - a deadly disease that's "efficiently spread" - creating "the perfect storm," Fauci said. "When those things come together ... it really is historic."

He urged Americans across the country - no matter where they are - to follow "some fundamental principles."

"The fundamentals are not rocket science," he said. "It's universal wearing of masks, avoiding crowds, close the bars, [maintain] physical distance [and] personal hygiene, washing your hands. ... No doubt you're going to be able to turn these things around with some things as simple as that."