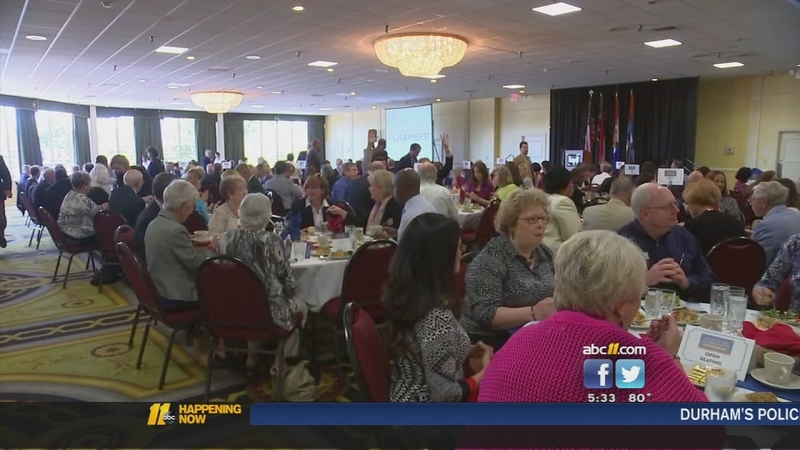 FAYETTEVILLE, N.C. (WTVD) -- A new name and logo has been unveiled for the Fayetteville regional chamber of commerce.

The Greater Fayetteville Chamber logo features four stars in a salute to the military.

Hundreds of Sandhills leaders viewed the image for the first time during the annual State of the Community luncheon Tuesday.

Fayetteville mayor Nat Robertson touted the city's double digit percentage drop in the crime rate for the second year in a row.

Robertson and Cumberland County Board of Commissioners Chairman Kenneth Edge talked about the early stages of a joint non-profit to foster economic development. The inter-local group should have funding approved by the end of September with a Board of Directors appointed in October.

Edge also spoke of the 2017 property tax re-evaluation, and the county's partnership with the city to coordinate homeless facilities. The county is also working on a jail diversion program to provide alliance behavioral health services to repeat offenders so that they may have healthcare and employment resources.

His team is working on national exposure for the 3rd annual All-American Marathon next spring, and this weekend the Spartan Race at Smith Lake is expected to draw more than 6,000 participants.

Funck, who arrived to Bragg for a second tour over the summer, also addressed the ever-present challenges in being the city manager for the world's largest military installation.

"A previous leader here on Fort Bragg and now the chief of staff here at the Army continues to say a common them you know, 'We're either preparing for combat or we're at combat,'" said Funck, quoting General Mark Milley.

"They have an incredible amount of leadership especially at a very young level, and they have a very strong work ethic," he said.

Both mayors of Spring Lake and Raeford expressed desires to become destination towns for overnight travelers, rather than "drive-thru cities," as they work to foster economic development.

"We recognize transformation is not easy, but it's possible" said Spring Lake mayor, Chris Rey. "You just have to believe."

Raeford mayor John McNeill talked about the desire for downtown development, agreeing with a man who told him Raeford needs a downtown restaurant "where you can use a real fork and knife."

"And hopefully this time next year we'll have a dam, and we'll have water, and that's good news," Warner said to crowd applause. "Don't let all this social media and the newspaper confuse you. It isn't slow [progress]. This is fast."

Till remembered the unfavorable evaluation the Army had of CCS two years ago, where a commander spoke of the need for achievement improvement in order for the area to be considered in another base realignment phase.

Till also encouraged business leaders to join in on the mentoring effort he's continually pushed for the system's school children.

"There's four of you for every one of them," he reminded the crowd.