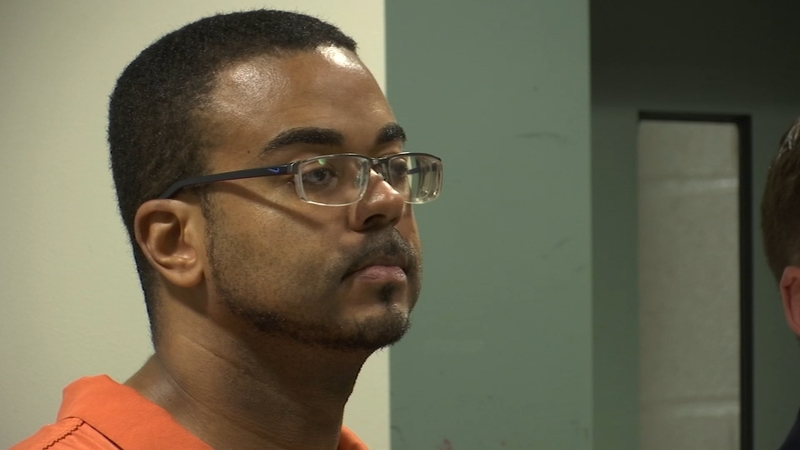 FAYETTEVILLE, N.C. (WTVD) -- A middle school teacher was arrested and charged with making explicit comments to a student Thursday.

Investigators said Thomas used Snapchat and emails to exchange explicit and suggestive messages with the student.

Our top priority is the safety of our students. When the allegations were brought to our attention, we immediately reported them to law enforcement. Mr. Thomas has been suspended with pay, pending the outcome of the investigation.

These allegations are extremely disturbing; however, they are not representative of the 3,000-plus dedicated teachers who serve our students on a daily basis. As a part of regular procedures, Cumberland County Schools conducts extensive background checks on all employees. Employees are also reminded annually of 'Prohibited Relationships with Students' during the CCS Employee Handbook review period.
School officials will continue to cooperate with the Cumberland County Sheriff's Office as they lead this investigation. Whenever law enforcement is involved, the district is prepared to take all appropriate personnel actions based on the results of the investigation.

Marcus Bailey has a son and a daughter that attended Richard Thomas's class in elementary and middle school.

"I met him on a few occasions and he's a well-mannered, well-spoken and just did not expect that," Bailey said.

When Bailey heard of the arrest on Thursday, the father of two sat down with his kids to ask them if Thomas had ever made them feel uncomfortable.

"They both said no," Bailey added.

The use of social media in this particular instance reminded Bailey to continue to have talks with his 12 and 13-year-old about being safe online.

"I tend to not let my children have too many social media accounts. I let them have maybe one that I can keep up with," Bailey said.

Victim advocate Anna Salenki, a representative for the Rape Crisis of Cumberland County, said having those talks are vital to ensure your children know when lines are being crossed.

"It can go from safe and fun and goofy to dangerous really, really quickly," Salenko said.

The center said open communication can also allow children to have more confidence to speak out when uncomfortable situations or conversations occur.

"They're just preying on our children, and it just makes me really uncomfortable," Bailey said.

Cumberland County Schools said Thomas has been an employee at Ireland Drive Middle School since August of this year. Previously, he taught at W.H. Owen Elementary School from 2014 until last spring.

Thomas is charged with five counts of indecent liberties with a minor. He is in jail on a $375,000 bond.