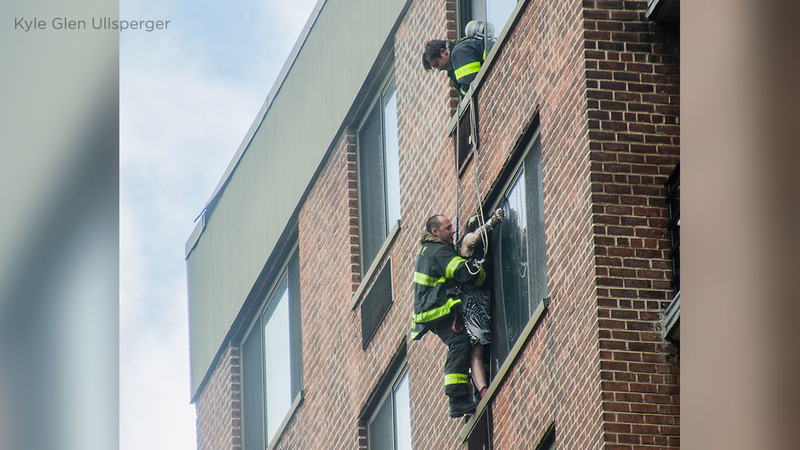 NEW YORK -- The FDNY put a rarely used maneuver into action to save a woman who was hanging from a 16th-floor window during a high-rise fire in Manhattan.

The fire was reported Tuesday near Lenox Avenue and West 135th Street just before 1:30 p.m.

Firefighters found a woman panicking at a window on the 16th floor and decided to do something they rarely do -- a roof rope rescue from the 17th floor.

Firefighter Brian Quinn said he stayed at the window and tried to calm her down and told her not to jump and the FDNY would come and rescue her.

"This was really a heroic rescue and shows the talent and bravery of the members of the FDNY, something that is rarely done," FDNY Commissioner Daniel Nigro said. "They used their skills quickly, assessed the situation quickly, did what had to be done, bravely. Thanks to their bravery, effort and ingenuity, we have someone who was saved here on Lenox Avenue. It's a happy day for her and a happy day for all of us."

Quinn said he stayed behind the woman so if she did decide to let go or jump, he was holding her onto the glass -- he had one arm inside the window holding onto a wall and the other was around her waist.

"I didn't want to see anyone fall, I just wanted to get her inside," Quinn said.

The woman was treated for smoke inhalation and the fire was under control by just after 2 p.m.

"I think it means everything because that's why they come to work, the chance to save somebody is what all firefighters live for," Nigro said. "This doesn't happen often, the last time, it happened twice, in 2016. That's how infrequent this is. Rescues happen all the time, roof rope rescues, not so much. Heroism is what they are all about."

The details surrounding the fire are not yet known.

The driver had suffered a medical emergency.