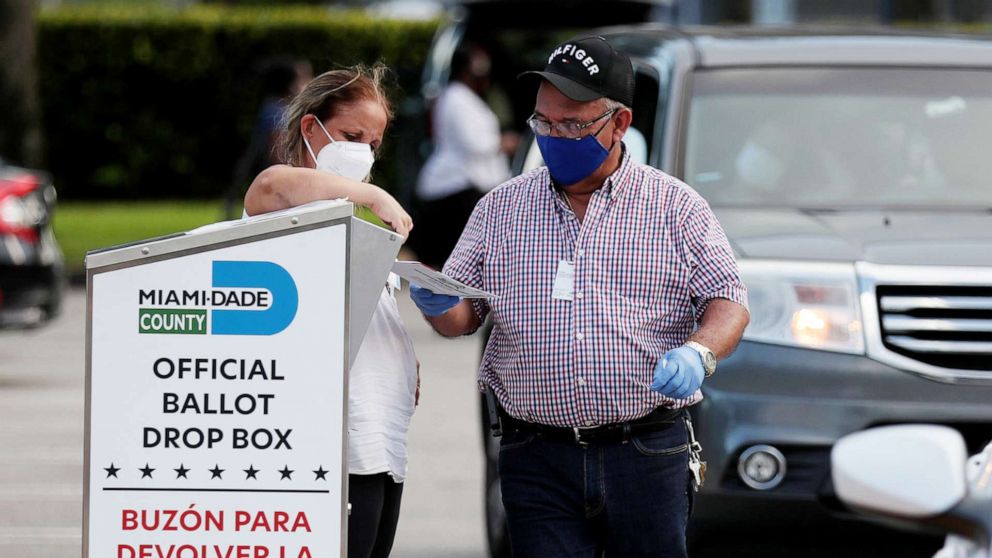 Despite the push from activists, corporate leaders and Democrats to reject legislation imposing new restrictions on voting, late Thursday, the Florida legislature passed an omnibus election bill that, among other things, limits ballot drop boxes compared to current law.

The state Senate removed a provision the state House added Tuesday that would have required voters to present a photo ID to an election official when returning a mail ballot via drop dox. Democrats in the state House blasted the ID requirement since a voter is never required to show one when using a Postal Service mailbox.

No Democratic lawmakers supported the bill, and one Republican state senator opposed it as well. The bill, SB 90, now heads to Republican Gov. Ron DeSantis' desk. A spokesperson for the governor said DeSantis supports the bill, saying it "will ensure that Florida remains a national leader in election security, integrity and transparency."

Following the 2020 general election, which former President Donald Trump and allies falsely but repeatedly claimed was illegitimate and filled with fraud, there has been an unprecedented effort among states to enact legislation with new hurdles to casting a ballot. According to the nonpartisan Brennan Center for Justice, nearly every state has introduced bills like this and at least five have already been enacted.

Voting rights and civil liberties groups have already filed several lawsuits seeking to strike down the new laws in Iowa and Georgia. One of the attorneys representing some of those cases, Marc Elias, has already promised a lawsuit if Florida's bill becomes law.

The National Vote at Home Institute, a nonpartisan nonprofit advocating pro-voter policies, said in a statement Thursday the bill "would make a more hostile voting environment in a state that otherwise has made voting easy and accessible for dozens of elections prior to 2020."

Democrats in Florida accused Republicans of trying to suppress the vote and solve a problem that doesn't exist, saying there's no evidence mass fraud occurred in Florida -- or elsewhere -- to warrant these changes and citing past comments from the governor and other Republicans praising the November election.

"The people are reading this, saying to themselves, 'can't they see that this is perceived as voter suppression?'" said Democratic state Sen. Darryl Rouson Thursday. "As for me, I believe my eyes, and doggonit, I can read, and what I read is not pretty."

"Why do we think there's a need to fix something that is not broken?" Democratic state Rep. Dianne Hart said Wednesday. "Not a single person in favor of this bill has been able to produce one example of one incident of fraud that this legislation is supposed to prevent."

Republicans did not dispute that the last election was successful, but they argued these changes will keep Florida's elections accessible while establishing "guardrails" to prevent potential fraud in the future.

"We did have a great election, but why should we be satisfied there?" said Republican state Sen. Travis Hutson Thursday. "I believe that every legal vote should count. I believe one fraudulent vote is one too many, and I'm trying to protect the sanctity of our elections."

The drop box and provisions to prevent so-called "ballot harvesting" -- when a third party collects and delivers mail ballots -- were at the center of the contentious debates in the legislature this week.

Instead of allowing constant video surveillance of drop boxes, they now must be physically monitored at all times. Drop boxes can only be at election supervisors' main and permanent branch offices or locations approved for early voting. Excluding drop boxes at offices, they can only be accessible during the early voting period hours of operation. Counties can, in theory, have a drop box at the office location that's accessible 24 hours through poll closing time on Election Day -- but only if they pay an employee to man it. Democrats called this an "unfunded mandate."

Drop boxes are a convenient way for voters to return mail ballots without the Postal Service. However, this bill eliminates much of that convenience by limiting where and when voters can access them, and since it's up to each county election supervisor whether to staff a drop box beyond regular early voting or office hours, voters in certain counties may be at a disadvantage compared to others.

Republicans said this prevents "ballot harvesting," and is necessary for election security. But Democrats disagreed, arguing it doesn't matter who returns a ballot or how many one person returns since mail ballot verification only happens once the ballot gets to the supervisor's office.
Report a correction or typo
Related topics:
abc newsnational
Copyright © 2022 ABC News Internet Ventures.
TOP STORIES
Winter storm moves out, refreeze possible overnight
NCSHP reports 200 crashes statewide, urges drivers to stay home
Dozens of RDU flights canceled through Monday evening
Monday events canceled, postponed due to winter weather
Why do we get freezing rain instead of snow or sleet?
FBI identifies hostage-taker at Texas synagogue
How to drive on snow, ice and get out of a skid
Show More
Expect more worrisome COVID variants after omicron, scientists say
After Biden's first year, the virus and disunity rage on
Novak Djokovic leaves Australia after court rejects visa challenge
Ukraine claims Russia behind cyberattack in 'hybrid war'
Hostages in N. Texas synagogue 'out alive and safe,' Gov. Abbott says
More TOP STORIES News