'Every day is worse and worse': Durham dance studio raises funds for instructor's family in Ukraine 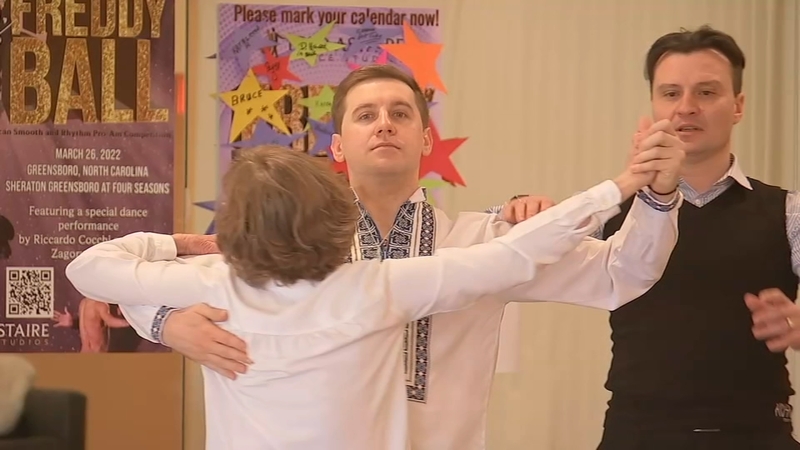 DURHAM, N.C. (WTVD) -- When Ruslan Golovashchenko flew into North Carolina for work last week, he expected to stay just five days. But on day six, he's still here, with no end in sight.

Golovashchenko left his home in Kyiv just before fighting broke out and has watched in horror as Russian forces have invaded the country.

"My wife called and said 'Ruslan, the war started and Russia is starting to bomb,'" Golovashchenko said.

His wife and two daughters, ages 8 and 7, remain in Kyiv; his youngest daughter has special needs, complicating evacuation efforts.

"Now, I think every day is worse and worse," said Golovashchenko.

Most of the instructors and both owners at the Fred Astaire Dance Studio in Durham are Ukrainian natives, who have spent the past several days in shock over the unfolding events.

Titarenko went to graduate school in Kharkiv, the country's second-largest city and a site of heavy bombing.

"When you start seeing those streets and roads where basically four years ago and they're all gone. It's just like ruins," said Titarenko.

Fellow instructor Yuliya Klyuchnyk added: "I just pray that most people are going to survive. I have an aunt in Kharkiv, where the bombing is happening. It's very scary."

Titarenko and Klyuchnyk are originally from Poltova and have family still there. Klyuchnyk has tried to convince her parents to evacuate.

"They don't want to leave the country," said Klyuchnyk.

Studio owner Yuiry Simakov has been in the United States for the past 18 years and is responsible for bringing over many of these instructors during that period. Throughout this time, they've shared a love of dancing and pride in their culture; now they're sharing despair and anguish.

"We hardly sleep. We check in with our parents every hour. Every day, just asking God to save them. When they answer the phone, it's a good thing and you're happy they're alive," said Simakov.

Their love of dancing has served as an important outlet, a temporary distraction from the ongoing violence.

"On Monday, I thought how I'd be able to teach and bring joy to people. I thought I'd cancel my classes, but actually, I had the first lesson, and you take the step, and the students are supportive. And it was good medicine. I was happier by the end of the day," said Simakov.

The studio is hosting a benefit lesson Tuesday night to raise funds and assist Golovashchenko's family to evacuate Kyiv and help them settle as his work future is uncertain.

"It's quite dangerous to move in the night, it's better to move just in the daytime. So, we try to organize somehow they move step by step, from Kyiv, 100 kilometers to another city to another, another, another, and then gradually come to the border," said Golovashchenko.