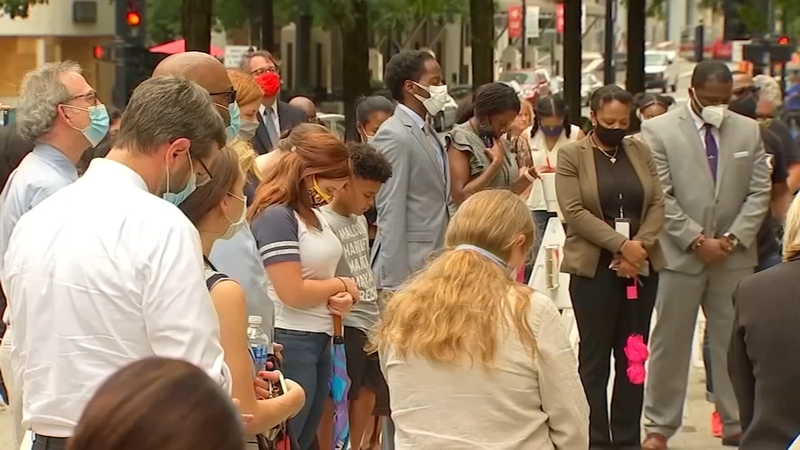 RALEIGH (WTVD) -- It was a remarkable moment on the steps of the Wake Courthouse Thursday. On the same steps where George Floyd protests kicked off and where damage from the riots still remains, some of the highest figures in our local judicial system stood praying for the system itself.

"When I first saw (the George Floyd video), my first reaction was oh no, not again," said Wake Superior Court Judge Vince Rozier.

Amid this national reckoning about race and racism after George Floyd, Rozier and five other African-American Wake Superior and District Court judges did not gather to protest. They gathered to pray.

"That was just our way of stepping outside of the courthouse; taking off the robes and just acknowledging that we're human too. We have hearts. We're hurting as well," Rozier said. "I prayed for humility in our roles, for our system. If there's any bias or prejudice or racism or brutality that it be purged - that the evil be removed."

Wake County Superior Court Judge Vince Rozier joined five other black Wake judges today in a moment of prayer outside the courthouse. Our conversation with him amid this national reckoning over race, racism and criminal justice reform is tonight at 11. #abc11 pic.twitter.com/LW0wxlukM1

In the days since Floyd died under the knee of police in Minnesota, the rallying cries of 'No justice, no peace' also ring for judicial reform.

ABC11 asked Judge Rozier if he agrees that there is systemic racism in the judicial system. "As a judge, it's hard for me to comment about that specifically," he said. "But statistically it catches your attention."

We also asked the judge about the stunning disparities in local arrests records dug up by the I-Team: In Wake County, blacks are one-fifth of the population but account for more than half of all the arrests. Rozier responded to the question if the numbers seemed fair?

"As a judge, it's my job to determine what's fair based on the law when a case comes before me. But I will say the stats are alarming," he said. "I think that's the question we're all grappling with now. A lot of people are struggling to figure out if those statistics mean that every single individual, or police officer is racist or prejudiced, or if all those statistics are the result of implicit bias or the result of the way we police."