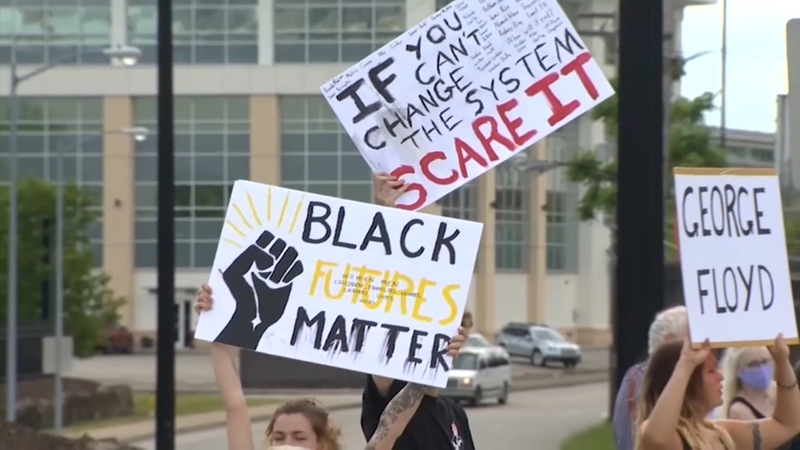 RALEIGH, N.C. (WTVD) -- As grief and outrage over George Floyd's death in police custody gave way to fires and looting in Minneapolis, the protests quickly spread to cities nationwide. While there were none in Raleigh Friday night, city and county leaders sure seemed to think there would be.

Raleigh social justice activists Kerwin Pittman and Dawn Blagrove are helping to organize a rally and march from the steps of the Wake County Courthouse for Saturday evening.

"We're planning a peaceful rally," said Pittman, executive director of Recidivism Reduction Educational Program Services (RREPS). "And we are hoping that it stays that way."

Pittman and Blagrove telling ABC 11 that rumors and confusion over protest times and dates is simply a reflection of how many people and groups want to speak out about the death of George Floyd under the knee of law enforcement.

"It brought back traumatic thoughts," Pittman said. "And it's a really sad thing that type of policing and this style of policing has become police culture all across the country."
Blagrove, executive director of Emancipate NC, added, "It's important for us to come together to let the powers that be know that we are no longer accepting thoughts and prayers as it relates to protecting our community. We want to see real action."

In Minneapolis Thursday, at the intersection of George Floyd's deadly encounter with police, Rev. Al Sharpton called for National Day of Action rallies on Saturday in cities across the country.

"Being as that the recent killings that have taken place in Raleigh as well as the state, the city of Raleigh really does need to stand up in solidarity," Pittman said.

Blagrove telling us ABC11 that she's counting on Raleigh police officers to not be the aggressors at the weekend demonstration. She says she wants to see a similar hands-off approach that officers took with armed ReOpen NC demonstrators who marched through downtown earlier this month in protest of the stay-at-home order.

"If (police) were able to not antagonize white men walking in the streets armed with long guns, then a group of people peacefully protesting police accountability and brutality should not have any problems," Blagrove said.

A group of about 11 mostly-armed demonstrators protesting the stay at home order marched around downtown Raleigh and ordered sandwiches at a Subway. #Covid_19 #ncpol #MealTeamSix pic.twitter.com/XA1BIU7JHH

Friday afternoon, Raleigh Police Chief Cassandra Deck-Brown, for the first time, addressed the tension erupting from Minneapolis. In a statement she called George Floyd's death "disheartening" and a "concern to the law enforcement profession as a whole.

"(For officers) to act in any way that is contrary to upholding professional standards is unacceptable behavior that cannot and should not be rationalized, excused or overlooked," Deck-Brown said.