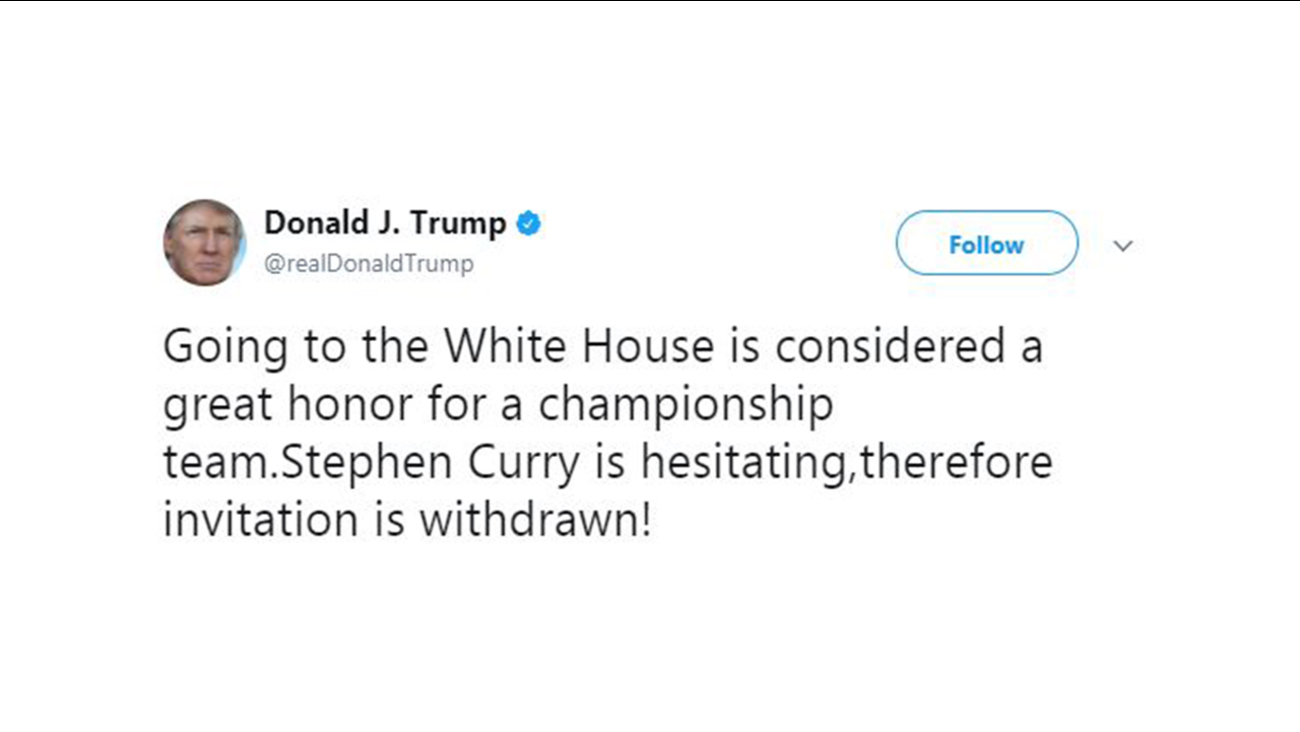 SAN FRANCISCO, California -- Trump kept up his foray into the sports world on Saturday, when he responded to comments by Stephen Curry of the Golden State Warriors, who has made it clear that he's not interested in a traditional White House trip for the NBA champions.

"Going to the White House is considered a great honor for a championship team. Stephen Curry is hesitating, therefore invitation is withdrawn!" Trump tweeted while spending the weekend at his golf club in New Jersey.

The Warriors had a response to Trump's tweet. In a statement, the team said, "There is nothing more American than our citizens having the right to express themselves freely."

After day of criticism from NFL, NBA players, Pres. Trump reiterates that players who kneel during National Anthem should be fired. pic.twitter.com/T24hyqvs9w

It was not immediately clear whether Trump was rescinding the invitation for Curry or the entire team.

LeBron James, perhaps one of the most recognizable athletes in the world, also tweeted his disagreement with Trump.

"U bum @StephenCurry30 already said he ain't going! So, therefore, ain't no invite. Going to the White House was a great honor until you showed up!" James said.

U bum @StephenCurry30 already said he ain't going! So therefore ain't no invite. Going to White House was a great honor until you showed up!

Houston Rockets guard Chris Paul joined several professional athletes in denouncing President Donald Trump for suggesting that owners fire players who kneel during the national anthem and that fans consider walking out in protest "when somebody disrespects our flag."

"With everything that's going on in our country, why are you focused on who's kneeling and visiting the White House??? #StayInYoLane," Paul tweeted.

With everything that's going on in our country, why are YOU focused on who's kneeling and visiting the White House??? #StayInYoLane

Paul is currently the President of the NBA Players Association.

Also, the National Football League and its players' union on Saturday released a statement against Trump's comments.

"Divisive comments like these demonstrate an unfortunate lack of respect for the NFL, our great game and all of our players," the league commissioner, Roger Goodell, said in a statement.

DeMaurice Smith, executive director of the NFL Players Association, tweeted: "We will never back down. We no longer can afford to stick to sports."

Trump, during a political rally in Alabama on Friday night, also blamed a drop in NFL ratings on the nation's interest in "yours truly" as well as what he contended was a decline in violence in the game.

Smith said the union won't shy away from "protecting the constitutional rights of our players as citizens as well as their safety as men who compete in a game that exposes them to great risks."

Several athletes, including a handful of NFL players, have refused to stand during "The Star-Spangled Banner" to protest the treatment of blacks by police. Quarterback Colin Kaepernick, who started the trend last year when he played for the San Francisco 49ers, hasn't been signed by an NFL team for this season.

Trump, who once owned the New Jersey Generals of the U.S. Football League, said those players are disrespecting the American flag and deserve to lose their jobs.

"Wouldn't you love to see one of these NFL owners, when somebody disrespects our flag, you'd say, 'Get that son of a bitch off the field right now. Out! He's fired," Trump said to loud applause.

Trump also predicted that any owner who followed the presidential encouragement would become "the most popular person in this country" - at least for a week.

The players' union said in a statement that "no man or woman should ever have to choose a job that forces them to surrender their rights. No worker nor any athlete, professional or not, should be forced to become less than human when it comes to protecting their basic health and safety."

The NFLPA said "the line that marks the balance between the rights of every citizen in our great country gets crossed when someone is told to just 'shut up and play.'"

Buffalo Bills running back LeSean McCoy tweeted, "It's really sad man" and then used an obscenity to describe Trump.

On the issue of violence on the field, Trump said players are being thrown out for aggressive tackles, and it's "not the same game."

Over the past several seasons, the NFL and college football have increased penalties and enforcement for illegal hits to the head and for hitting defenseless players. A July report on 202 former football players found evidence of a debilitating brain disease linked to repeated head blows in nearly all of them. The league has agreed to pay $1 billion to retired players who claimed it misled them about the concussion dangers of playing football.

During his campaign, Trump often expressed nostalgia for the "old days" - claiming, for example, that protesters at his rallies would have been carried out on stretchers back then. He recently suggested police officers should be rougher with criminals and shouldn't protect their heads when pushing them into squad cars.

It's also not the first time he's raised the kneeling issue. Earlier this year he took credit for the fact that Kaepernick hadn't been signed.

Television ratings for the NFL have been slipping since the beginning of the 2016 season. The league and observers have blamed a combination of factors, including competing coverage of last year's presidential election, more viewers dropping cable television, fans' discomfort with the reports of head trauma and the anthem protests.

Ratings have been down even more in the early 2017 season, though broadcasters and the league have blamed the hurricanes that hit Florida and Texas. Still, the NFL remains by far the most popular televised sport in the United States.

Trump said the anthem protest was the top reason NFL viewership had waned.

"You know what's hurting the game?" he asked. "When people like yourselves turn on television and you see those people taking the knee when they're playing our great national anthem," he said.

Trump encouraged his supporters to pick up and leave the stadium next time they spot a player failing to stand.

"I guarantee things will stop," he said.