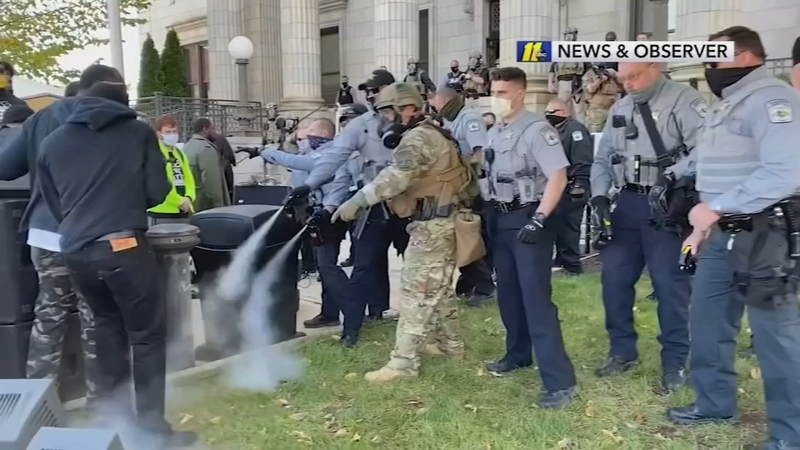 23 arrests made as Graham march ends in chaos

GRAHAM, N.C. (WTVD) -- What was supposed to be a peaceful half-mile march from a Black church to a Confederate monument in downtown Graham on Saturday ended in chaos. At least 23 people are facing various charges over the confrontation.

ABC11 was at the Monday afternoon news conference where Alamance County community engagement and diversity coordinator Michelle Mills outlined new details for the gathered media, including that demonstrators had created a safety hazard by bringing a running generator and gas cans in clear violation of the terms agreed to by the City of Graham and its police force.

Mills also said a female deputy was injured when she was shoved to the ground by demonstrators.

Graham Police arrested eight people and the sheriff's office arrested at least 15 people -- only four of them Alamance County residents -- in the ensuing chaos.

The sheriff's office also said a woman in the crowd was armed with a knife and ammunition.

Belle Boggs and her 6-year-old daughter were caught in the confusion.

"Not 30 seconds passed when people started screaming," Boggs said. "The first person I hear screaming was my daughter, who was overcome with the vapors from the pepper spray."

Boggs said she was "horrified" by what took place.

On Tuesday, the sheriff's office said deputies spotted someone concealing a generator and gasoline container during the march, and when a deputy tried to intervene and shut off the generator, some in the crowd resisted.

The scuffle prompting three warnings for the crowd to disperse before pepper spray was released once in the air and toward the ground.

"We're extremely disappointed that Rev. Drumwright did not adhere to the guidelines in the facilities use-policy bringing flammable materials to the event," Mills said.

On Saturday, the Rev. Greg Drumwright led a planned and permitted march from his church to Alamance County's courthouse to encourage voting on the last day of early voting in North Carolina.

The Graham Police Department and the Alamance County Sheriff's Office ended up arresting and using pepper spray after the group began blocking the roadway without authorization.

At a news conference Sunday, Drumwright disputed that reasoning.

Drumwright said the group was permitted to stand in the courthouse square and was escorted through the streets by the police. He also said that the group had "no intention" of having the rally in the street.

Police said attendees, some without masks, paused in the roadway for about nine minutes, creating traffic backups "in all directions around court square."

Newsgathering partners at the News & Observer said about 200 racially-diverse people attended Saturday's march -- including a 5-year-old girl and other children.

Lindsay Ayling, a graduate student and anti-racism activist who participated in the rally, told The Associated Press police used tear gas indiscriminately and without reason on the crowd, including on children.

"The police were looking for excuses to use pepper spray and arrest members of the crowd," she said.

Drumwright, a community activist and adjunct professor at High Point University, said he is planning another large demonstration for Election Day.