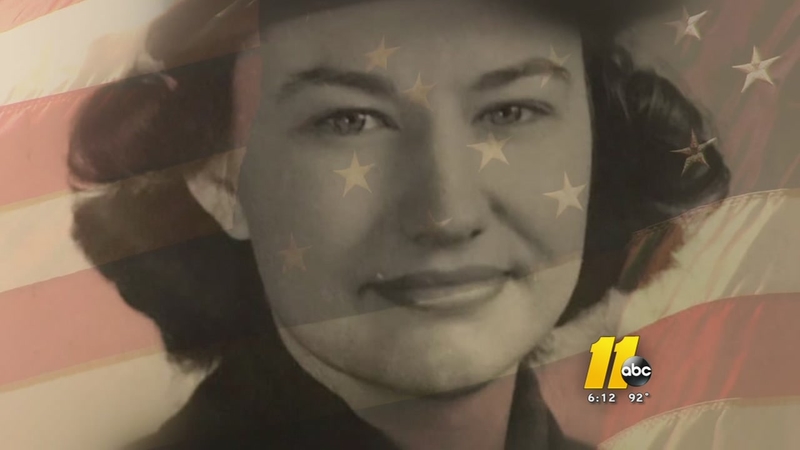 DURHAM, NC (WTVD) -- They represent what's been called the Greatest Generation, and sadly, there's no stopping the inevitable fight against time.

According to the U.S. Department of Veteran Affairs, at least 362 veterans of World War II die every day, and most - if not all - who remain are in their 90s.

Raleigh resident Anne Capucille, a U.S. Army Veteran who enlisted after the attack on Pearl Harbor, remembers the moment she heard news of the ambush on the radio.

"I knew there were problems in the world, and that an attack could've happened somewhere else - but not to us," Capucille recalled to ABC11. "We were the people who helped everybody. Next thing you know, here we are being attacked. So I signed up."

Even at 98, Capucille's memory is as sharp as a tack; she can still describe in full detail every aspect of her time in the Women's Auxiliary Corps.

The number of living WWII veterans is rapidly dwindling.

"The most exciting thing was driving an 18-wheeler truck," she said. "Everybody helped, and everyone was willing, everyone felt that loyalty. Everyone realized this was my country. It wasn't just a place that we hoped would get better. I've got to do what I could do to make it better."

As confident as she is coherent, Capucille is well aware of her status as being among the last of a dying generation. Of the more than 16 million Americans who helped defeat the Axis Powers, the National World War II Museum reports less than 558,000 were alive in 2017, including 13,302 in North Carolina. The Museum further estimates that the entire generation of World War II veterans will be gone within the next 10-15 years.

"I'm proud of everything that I did," Capucille said. "I'm as proud of this country now as I was then."

She's also proud to share her story, and recruit others to do so as she has with artist and filmmaker Revere La Noue. Together with the Durham VA Health System, La Noue is working on a project called My Life, My Story, and a series of podcasts recording veterans stories to share with VA medical staff and the general public.

"I was looking around for a way to give back, and this seemed like a great opportunity to express my patriotism in a way that's kind of hard to do sometimes," La Noue tells ABC11. "I realized that these stories can't vanish, and they are, they're vanishing very quickly. It was important not just for me to hear them, but for the next generations of people to hear them."

"To hear that from the voice, unedited, un-Hollywood, is something that's very special and important. My job is to enable that voice to come out, and you sort of hear the veteran grow into the storytelling because so many times they want to tell their story."

As to what part of World War II history is most important to learn, Capucille insists it's "all of the above," including but not limited to Pearl Harbor, D-Day and the Holocaust.