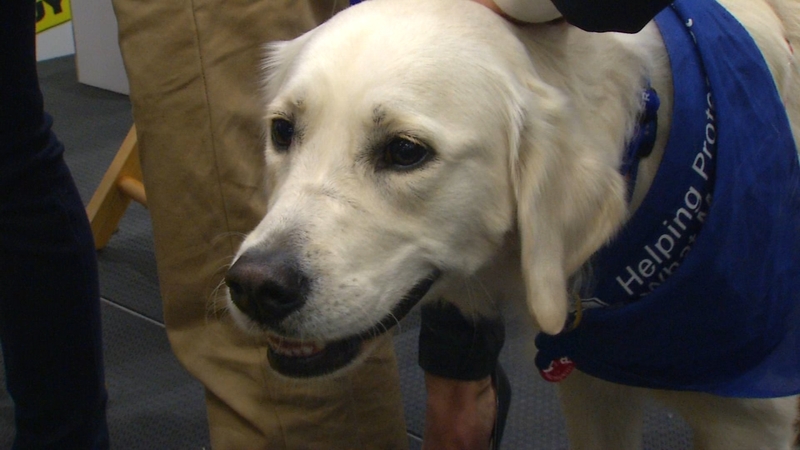 GREENWICH, Connecticut -- Just a few precious moments could have meant life or death for a Greenwich, Connecticut, family when their home suddenly caught fire.

"It is alarming when you get a call from your security system," said Dave Carrescia, the homeowner.

Carrescia was away working in Midtown Manhattan when he received the disturbing call from an ADT dispatcher.

"I kept him kind of calm. I said, 'If you want to check make sure your family, no one is there you can do that, but the fire department has been dispatched,'" said Leatrice Johnson, who has worked with ADT for the past eight years.

When firefighters arrived on scene, they noticed smoke coming from the back of the home and inside they discovered the family's 1-year-old golden retriever tapped in a kennel.

"When we first arrived there wasn't any signs of fire from the outside of the house," said Lt. Steve Whittaker, Greenwich Fire Department. "We went in, located the dog, it was in a crate in the dining room, and we realized that there was a basement fire."

Luckily Mr. Carrescia's wife and three small children were not home at the time, however firefighters say the heads up the family's ADT home security system provided made all the difference.

"The fire could have burned for several minutes and certainly the dog would have perished, and in this case the fire damage was held to a minimum and the dog was able to be saved," said Chief Peter Sieciensk, Greenwich Fire Department.

On Thursday at a special ceremony coordinated by ADT, Samsung, and BestBuy the family's pup, Maggie, had the opportunity to be reunited with her rescuers.

"I was like, 'Oh my God,' it was really an actual fire, but I was glad I was able to save the dog's life," Johnson said with a grin.