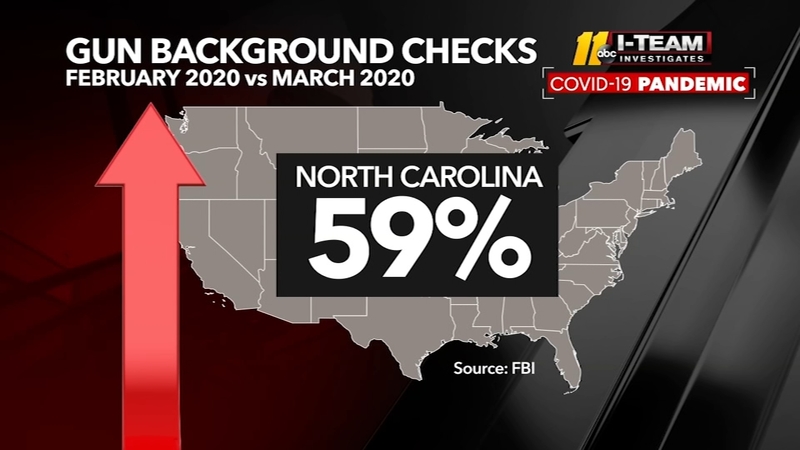 WAKE FOREST, N.C. (WTVD) -- It's not just toilet paper people are after.

An ABC11 I-Team analysis of new data from the Federal Bureau of Investigation shows a surge in requests for background checks to purchase firearms.

"It came really quick," Kurt Lieberman, owner of Tar River Arms in Wake Forest, said of the demand. "I kind of watched the (ammunition) go first, and when they made it a global pandemic, that's when everything went crazy."

The pandemic, of course, is the novel coronavirus and the disease it causes, COVID-19, which has swept across the United States and led to several statewide Stay-at-Home orders, including in North Carolina.

Specifically, the I-Team compared background checks between February and March, as COVID-19 became a household name.

As for who is coming to purchase guns, several gun store owners across the Raleigh-Durham area said they're noticing a steady stream of first-time gun buyers, including women.

"Sometimes they'll say, 'I'm a first-time buyer, can you help me what I'm trying to get?'" Lieberman said. "Some come in not knowing the process and think they can just pick up a pistol without a permit."

North Carolina law requires a permit to purchase a handgun, and that generally requires an in-person visit to the county sheriff's office.

The purchase of long guns, including AR-style rifles, do not -- and gun store owners agree that might be a reason why they are the most popular sale.

Federal background checks are required for all legal firearm purchases at licensed dealers in the United States. They sometimes do not include sales at gun shows, which some call the gun show loophole.

Lieberman said that the coronavirus' impact on first responders might also be a factor in the uptick in sales, as entities such as the New York City Police Department, which reported that at least 17 percent of its officers have tested positive for COVID-19.

"We don't have the biggest police force as it is in Wake Forest. They do a good job, but if you lose 10 of 15 percent, that's a lot," Lieberman said.

As gun sales rise, though, Lieberman maintains so does the interest in gun safety courses; before every customer leaves, he reminds them what's at stake.