Raleigh family gets a home for the holidays 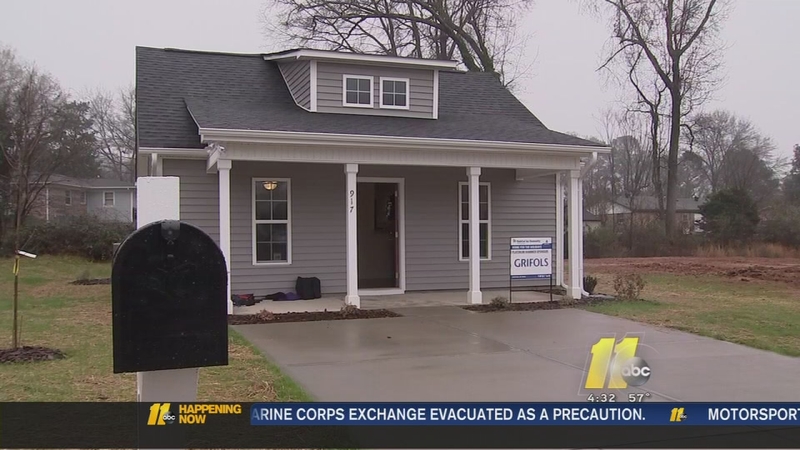 A home for the holidays

A Wake County family received a special present just in time for Christmas.

Mark and Kristina Bridges said the empty house in southeast Raleigh's Crosstowne subdivision already felt like home as they walked with their children through the halls of their new home on Skinner Drive where a wreath hung on the door.

"They're very excited about the rooms because it's their space and they can do what they want and something that they feel is theirs," Kristina said.

Mark and Kristina Bridges and their children finally have a home they can call their own.

"It feels wonderful. It feels like we've been in an apartment for far too long," Mark said.

The Bridges spent years moving around, but can finally put down roots.

Habitat for Humanity of Wake County welcomed the first-time homeowners to their new house Thursday afternoon.

"The whole story about Christmas is a family wandering and being homeless and a baby being born in a manger, and just that whole story and this connection with that means so much," said Habitat Wake CEO Kevin Campbell.

It meant just as much to the volunteers who put in hundreds of hours of sweat equity to get the home holiday ready.

Global healthcare company Grifols partnered with Habitat Wake to construct and sponsor the house which has been under construction since late September.

"To be able to do this a week before the holidays and be able to see the excitement in the children's eyes when they were talking about their own rooms, there's just nothing better," said V.P. of Human Resources, Lori Antieau.

"It's a blessing. We can say that we built this house together," Mark said.

Crosstowne was hit by the recession, with only 25 homes built prior to the economic downturn in 2008. Habitat Wake will complete 22 homes in the subdivision in 2015 and plans to build several more houses in the coming year.

The Bridges said they already share a special bond with their neighbors.

They officially close on their new home Monday.

"I can't imagine not crying on that day. It's going to be very exciting," Kristina said.

RELATED: FIND OUT MORE, INCLUDING HOW TO QUALIFY FOR A HOME