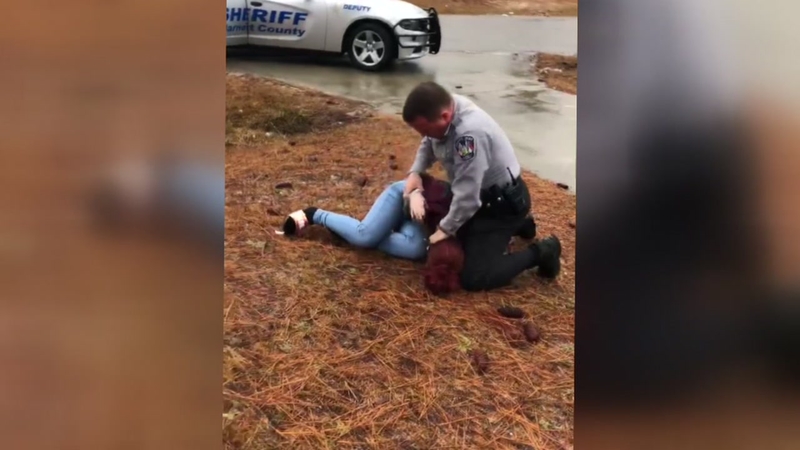 Teens in viral encounter with Harnett deputies speak out

HARNETT COUNTY., N.C. (WTVD) -- A Harnett County sheriff's deputy is on leave after video surfaced showing him wrestling two women to the ground during an arrest.

Harnett County Sheriff's Office notified the North Carolina State Bureau of Investigation (SBI), which is now looking into the case.

The incident in question happened around 10:40 a.m. Dec. 10. Deputies said they were called to the home after a complaint about illegal drug activity.

Deputies said they smelled marijuana coming from a car parked outside the house.

During the investigation, deputies learned the man seated in the driver's seat of the car had active warrants. When deputies detained him, they found a gun under his seat.

Tonight at 10/11, we’ll hear from two teenaged girls who were taken down by Harnett County deputies yesterday. The viral video has garnered thousands of views. #ABC11 pic.twitter.com/Pda1xh2s0v

Deputies said they found a small amount of marijuana on one of the female passengers in the vehicle.

Video posted to Facebook shows a deputy throwing two women to the ground while arresting them.

"Yo! What are you doing right now, she didn't do anything," says the woman recording the deputy as he threw the first woman to the ground. "Why are you doing that? What did she do?"

The women can then be heard accusing the deputy of making the arrest because the woman was recording them with her phone.

In the video, the deputy then comes toward the second woman and tackles her to get possession of both cellphones.

"It's evidence," the deputy says.

That deputy's actions are now being investigated by the SBI.

"I'm disgusted," she said. "After each of us were patted down, we both started recording and asking why (my boyfriend) was being detained."

She said her sister started recording, and then she recorded the video of her sister being taken down that spread across social media.

Aumbria said she strained her back and is "in pain right now" from where a deputy took her down to snatch both her phone and her sister's as "evidence."

She said something needs to change.